Analysis: There are limited options left now as political talks move to the end game

Speaking in the Dáil, Fianna Fáil leader Micheál Martin has criticised the Taoiseach's 'spinning and manouvering' as they enter discussions on forming a government. 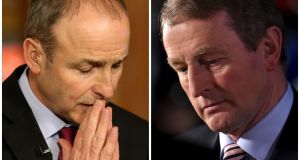 Enda Kenny and Micheál Martin have only three options: a minority government, some form of coalition or partnership or another election.

Fine Gael leader Enda Kenny was not expected to make a play for a grand coalition quite so soon in his first engagement with his Fianna Fáil counterpart Micheál Martin.

He certainly stole the initiative from his party’s traditional rival, which, officially, has only one proposal - to elicit support from the two leaders for the principle of a minority government led by Fine Gael or by Fianna Fáil.

Both parliamentary parties are meeting on Thursday to consider their options and strategies ahead of further engagements between Kenny and Martin.

As of now - as was the case on Saturday February 27th - there are only three realistic options.

The first is a grand coalition; the second a minority government supported by independents and the other big bloc; the third is an early election.

Each of the three options is not ideal and there are downsides aplenty. At the same time, there are also benefits, and there is always the national interest to consider.

One: A grand coalition by whatever name

Fine Gael last night described this as a “partnership”. The cleanest iteration would be a Fine Gael and Fianna Fáil link-up with an equal divvying of ministerial power and of responsibilities. The question of a rotating taoiseach would arise and would definitely be a live issue.

It’s a bit of a mystery why Independents should be drawn into this? They would constitute a tiny part and even with one or two Ministerial slots, each TD from this group (especially backbenchers) would struggle to explain what impact he or she had brought to government, unless there were specific constituency commitments.

For the bigger parties, it would be a huge victory for those who have an egghead approach to politics - who look at it from every aspect except from the human dimension. It would have potential to last the five years. It will also bring two parties together that are close in terms of ideology.

If the economy does well, it is not inconceivable both of the big parties might just buck the trend and come out of government more strongly.

The downside for the two parties involved is electoral vulnerability. If the economy falters they will let the main opposition party in and that will be Sinn Féin.

That said, Sinn Féin has a lot of growing up to do and will not attract widespread support unless enough people are convinced the party can act responsibly in government.

Why the party slid back towards the end of this year’s campaign can be attributed to doubt by those wavering about the party’s credentials on the economy. The person who was lacking in that regard was Gerry Adams.

Logic dictates that the party will need a change in leadership to mount a credible and serious challenge to enter government. But logic does not always play a starring role in Irish political theatre.

That said, Sinn Féin would make gains in any scenario where it was the main opposition party, Fianna Fáil, in particular, could find itself exposed as the (slightly) smaller party in government, and one whose members felt betrayed by it going into government with its traditional adversary.

It is a bit of a myth that Fine Gael and Fianna Fáil are Tweedledum and Tweedledee. There are significant differences between the parties on policy, cultural issues, and on the national question.

Poll: Tell us what you think

The likes of Eamon Ó Cuív have argued persuasively that Fianna Fáil in its philosophical outlook on the world could be closer in many respects, ultimately, to Sinn Féin.

It would have to go through a Fianna Fáil ard fheis. That won’t be pro forma, that is for sure. The resistance of the membership to this might be absolute.

It is true to say, however, of all the parties their respective economic and finance policies would be easiest to meld together. It is an amalgamation that will happen at some stage in the future, if not quite now. Politics in Ireland is fragmenting and our peculiar electoral system will mean that complex combinations will the order of the day in future.

If it were to happen, with such a huge majority, the reform agenda would be relegated down to Division 4.

While this coalition would have the potential to last the five years, my instinct is it’s unlikely. It would be the first time it was tried and both big parties would be hypersensitive to opinion poll variations that saw the opposition making ground.

It might be pulled early to avoid too much momentum gathering behind Sinn Féin or others.

Likelihood: The least likely option in my view. The Fianna Fáil leadership (which is strong after its electoral success) is opposed.

This has been the core of Mr Martin’s argument and he raised it with Enda Kenny last night. To make this scenario happen, you forget about majorities or reaching the magic number of 78. The operable number is whatever is needed for a majority in a key vote, if the other big bloc abstains.

Fianna Fáil has argued that it can lead a minority government. I don’t think it’s possible. The party would need 11 extra votes. In stability terms, by comparison it would make a house of cards look like the Rock of Cashel.

The more conceivable arrangement would be a Fine Gael administration. With Michael Lowry voting for it in an unsolicited manner, it would need an extra six at a minimum but really more than ten.

And they would need to be solid and sticky supporters, who wouldn’t desert ship at the first sign of an unpopular decision.

That’s why Fine Gael has been informally wooing the Labour Party (a very long shot) and trying to coax back the Greens and the Social Democrats. At least they would bring coherence.

The reality is they need to find Independents who are ideologically aligned and are prepared to stay the course in return for powers and concessions that far outweigh their parliamentary representation - that means a few ministries and big gestures towards their priority areas.

The quid pro quo for that would be unyielding loyalty.

The upside is that the government might last longer than most people anticipate. Minority governments in the past have been very focused and have been more successful than administrations with huge majorities.

Even then, you could not really see it lasting more than two years (which is the average in Nordic countries where such minority governments are commonplace). That is not great for long-term planning.

That’s where committees will come in. Parliamentary reform will only become meaningful if the outcome is indecisive and a minority government is surviving from hand to mouth as this one will be.

In that scenario, deals have to be struck and parliamentary committees have to spend weeks inching their way through contentious policy proposals before they even see the Dáil chamber.

It’s consensus (or fudge!) politics but it works well elsewhere, especially in Denmark where the third largest party (with only 20 per cent of the seats) is a single-party minority government, relying daily on the support of two other parties.

So discussion on the Budget would begin at the Finance and Budget Oversight Committee months before October with everything on the table as the participants sought to reach agreement on measures.

When the Minister presented it in October, there would be no surprises and agreement on most key areas.

Similarly, to overcome the ongoing difficulty with health, a specific committee could be charged to do the (thankless) work of coming up with a 20-year strategy for the health services that would have some form of legislative backing to ensure it was implemented by successive governments.

Minority governments have been successful in the past. But they were always of the form that the government was short of a handful of votes. Here the gaps are much wider. If you look back to the early 1980s, minority governments dependant on a handful of independents collapsed. On one occasion, a Fine Gael-led government fell when an Independent TD from Limerick Jim Kemmy could not support a budget proposal imposing tax on children’s shoes.

Over the past decade, we have seen Independent TDs quickly got cold feet in the past and have gone AWOL once measures that were not “crowd pleasers” were brought forward.

Likelihood: The most likely scenario.

Nobody wants it, we are told. But it will happen if there is nothing else on the horizon. This will come down to a key decision for Fianna Fáil. Can it run the gauntlet of another election having rejected Fine Gael overtures and not risk an electoral backlash?

If it happened now, the party would be back-footed and would have to have a very strong argument to remove itself from being portrayed as the awkward squad acting in its own interest rather than in the national interest.

However, the longer the impasse drags on without resolution, the more people will begin to accept that another election might be needed to give a more “decisive result”. That would mean a kind of electoral equivalent of Nice II or Lisbon II.

Likelihood: The second most likely scenario.