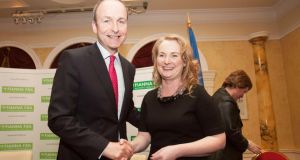 ‘The party is spending much of its effort and money on the push for Mary Fitzpatrick (above with Fianna Fáil leader Micheál Martin) to win a seat in Dublin.’

This weekend Fianna Fáil is in Killarney for the party’s annual ardfheis. As it happens, it is only 11 months since its last such gathering. The earlier timing is obviously designed to maximise exposure at the initial stages of the local and European election campaigns.

The party is placing much emphasis on the outcome of these elections and any definitive assessment of Fianna Fáil’s prospects for recovery and indeed of its current leadership must be suspended until the results of those elections are in.

Even at this stage, however, it seems a spectacular performance by the party in May’s elections seems unlikely. At best, the party will hold in or about its current share of seats in both contests.

Recent talk, for example, of Fianna Fáil getting up to four of the 11 seats in the European elections is overblown. There is no analyst or strategist in any political party, even in Fianna Fáil, who seriously believes it could win two seats in any of the three European constituencies. Indeed it is possible to envisage a scenario where Fianna Fáil might have only one MEP in the next European Parliament.

The party is spending much of its effort and money on Mary Fitzpatrick’s push to win a seat in Dublin. Fitzpatrick is a competent and experienced councillor and a strong media performer who will hold her own on the various debates between now and polling day.

Her difficulty, however, is that apart from the profile she garnered from earlier struggles with Bertie Ahern’s operation in Drumcondra, she has little citywide recognition. Fianna Fáil has sought to compensate for this lack of traction by putting four-page leaflets featuring Fitzpatrick into Dublin households in recent weeks and by purchasing extensive advertising at bus shelters.


Dublin constituency
In a highly competitive three-seat Dublin constituency where Fine Gael has a guaranteed seat, and where there will be at least one left-wing seat, most likely for Sinn Féin, a Fianna Fáil gain seems unlikely.

In the large South constituency for the European Parliament elections, Fianna Fáil has the advantage that the popular incumbent Brian Crowley is running again. It would be a major upset if he did not hold his seat.

In the Midlands-North West constituency, the incumbent Pat “the Cope” Gallagher is also running again. Fianna Fáil draws some comfort from the fact that private opinion polls point to Gallagher holding his seat in this enlarged four-seater. However, support for a high-profile incumbent is always overstated in early polls for European elections.

The same polls suggest Fine Gael’s Mairead McGuinness will hold her seat, Sinn Féin’s Matt Carthy is likely to win a seat, and Fine Gael’s other incumbent Jim Higgins is also doing well. In circumstances where there are a number of strong Independents, including the incumbent Marian Harkin and Senator Rónán Mullen, Fianna Fáil’s Gallagher faces an uphill struggle. The announcement this week by the Independent Roscommon TD Luke Ming Flanagan that he too will contest the European elections makes this constituency even more competitive.

In the 2009 county and city council elections, Fianna Fáil won 218 of the 883 seats then involved. If it was to hold that seat share in this year’s local election it would have to win 237 of the 949 seats which are now available after the extensive redraw of local electoral areas and redistribution of seats among councils which will be in place for this year’s election.

Fianna Fáil is slightly disadvantaged overall by the reallocation of seats but the most dramatic increase in seats is in Dublin which, in theory at least, should give the party more opportunity for recovery there.

One striking feature of Fianna Fáil’s candidate line-up for the local elections is the failure to select more female candidates. The party set itself the target of ensuring 30 per cent of its candidates would be female for this local election but has managed only 20 per cent.


Benefit
Overall, Fianna Fáil is hoping it will benefit from the fact that the electorate usually gives the sitting government a wallop in local elections. Voters will go to the polls in late May, however, with a sense of a slight economic recovery and this will temper the usual mid-term anger at the government – at least as far as Fine Gael is concerned. The current polling evidence suggests it is Labour which will suffer the brunt of a voter backlash and that Sinn Féin, not Fianna Fáil, is likely to be the main beneficiary.

When he addressed the 2012 ardfheis, the British political scientist Tim Bale, author of The Conservative Party from Thatcher to Cameron warned Fianna Fáil not to be distracted by success in local and European elections.

If it does very well in May, Fianna Fáil won’t be able to stop itself from spinning about how it heralds a dramatic recovery at the next general election. If, as seems more likely, the electoral outcomes are less buoyant, the party’s mood is likely to be more muted.