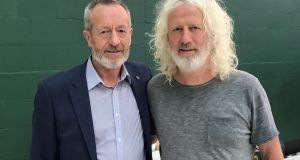 Fine Gael MEP and former GAA president Seán Kelly topped the poll on the first count in Ireland South shortly after 7.30pm on Monday with 118, 444 votes just shy of the quota of 119,866.

He was followed by Fianna Fáil TD Billy Kelleher on 84,083 and Independents4Change TD Mick Wallace on 81,741. The field was rounded out by Sinn Féin MEP Liadh Ní Riada on 79,072, Fine Gael Senator Grace O’Sullivan on 75,946, Councillor Malcolm Byrne of Fianna Fail on 69,166 and sitting Fine Gael MEP Deirdre Clune on 64,605. Five seats are up for grabs in Ireland South with a fight to the finish expected for the last spot.

Sean Kelly said that he was pleased to top the poll particularly given that his party fielded three candidate with Andrew Doyle TD receiving 38, 783 first preference votes.

“I didn’t really expect it. What you have to consider is that we had three Fine Gael candidates. It is the only place where you had three candidates from one party so to head the poll in that circumstance is pretty satisfying alright.”

Kelly said that whoever gets elected they will have to work for Ireland and not spend their time “spoofing.”

“More importantly than getting elected, those who are elected have to go out and work. Whoever is elected, I’ll be expecting them to go out and work for Ireland and not to be spoofing and pretending, or getting highlights for saying things that are often meaningless and cannot be implemented and then doing damn all afterwards.”

Meanwhile, Independent TD Mick Wallace says that he will remain “a thorn in the side” of the Government even if he wins a seat in the European Parliament.

“If I go to Brussels I guarantee you will remain a thorn in the side of the Government here. I promise you that.

Deputy Wallace said he expected to pick up a lot of votes on transfers.

“I would expect to do well transfer wise. I think people across the political spectrum respect the fact that I call a spade a spade and I often say things that people don’t like to hear. I call it as I see it. I think I have garnered respect for that from the people.”

Wallace, who is known for his casual clothing, was asked if he plans to “spruce up” if he ends up winning a seat in the European Parliament. He said that he thought his pink t shirt and dark pants constituted “spruced up.”

Meanwhile, sitting MEP Deirdre Clune said there was lots to play for over the coming days.

“We will wait and see. Hang in there. I have been here before. We will do it again.”

“I stood on my record. I have been here for five years. I worked hard at it. I think I contributed well and have huge ambitions for the future of this country. I think the next parliament and its relationship with the UK is going to be really important.

Clune, who lives in Cork, said that she spent yesterday catching up on gardening. She is trying her best to unwind amid the stress of the count.

You know what I have done for the last few days? Get back on top of things. I spent yesterday pulling weeds because it has been a dreadful few weeks for weeds. Its hard the waiting. I am a one who always knows that once the boxes are sealed there is no more you can do. I do switch off. I say it is in someone else’s hands. ”

Green Party Senator Grace O’Sullivan said that she is resigned to waiting until Wednesday for the full result.

Having had such a jubilant day Sunday based on the polls now it is a matter of staying in the game. As my mother said to me “you will still be in the Seanad. You can still get on and do the job. Everyone has to draw a breath and in my case it is going to be a long deep breath until Wednesday ”.