Election led to ‘most fractured’ Dáil since 1918, says Taoiseach 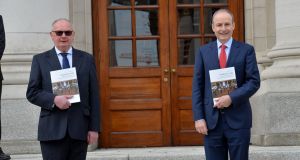 The Dáil which emerged from the February 2020 election was “the most diverse and fractured since 1918”, Taoiseach Micheál Martin has said in his introduction to the latest edition of The Irish Times Nealon’s Guide.

“The historical formation of the government of Fianna Fáil, Fine Gael and the Green Party took place against a background of an historic pandemic and shared belief in the need to try and put a stable government in place with an ambitious programme.”

The Irish Times Nealon’s Guide is Ireland’s best-known political reference work and provides a full guide to each general election. Since 1973, when it was founded by the late Ted Nealon, a new edition has appeared after every general election.

The latest edition contains the results of the February 2020 election, the Seanad election, the four 2019 byelections, the 2019 Local and European elections and the 2018 presidential election. There are also profiles and contact details of all 160 TDs, 60 Senators and 13 MEPs.