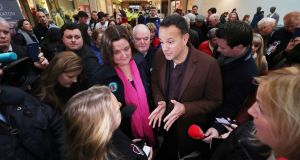 Party leaders are preparing a series of last-minute attacks on each other’s policies and records as they jostle for advantage in the final week of the election campaign.

Taoiseach Leo Varadkar on Sunday made what Fine Gael sources described as a calculated risk in labelling some Fianna Fáil TDs “backwoodsmen” who were opposed to “social progress”.

It drew an angry response from senior Fianna Fáil figures, who claimed the Taoiseach’s “mask slipped”, as well as causing concern among some Fine Gael campaigners in rural Ireland.

Party sources acknowledged Mr Varadkar’s comments could anger some, but felt it was a risk worth taking to put the spotlight on Fianna Fáil’s record on social issues.

It was claimed this could be used to persuade urban, liberal voters to vote for Fine Gael rather than smaller parties who could form a coalition with Fianna Fáil.

Senior Fianna Fáil figures said the party will concentrate on outlining its plans for government, with party figures confident it will win the most seats. There will be no last-minute deviation by leader Micheál Martin from the overall party strategy.

Senior Fine Gael sources said they would concentrate on attacking Fianna Fáil and the Greens, as the party seeks to persuade “Fine Gael defectors” to return before polling day.

Despite the strength of Sinn Féin in recent opinion polls, one senior party figure said that “Sinn Féin doesn’t matter to us”, although Fine Gael will pursue Fianna Fáil over the question of coalition with Sinn Féin, something which Mr Martin has said he will not agree to.

Views in Fine Gael are mixed on the party’s prospects after a series of opinion polls showed it behind Fianna Fáil and Sinn Féin.

“They are probably tired of us,” one Minister in rural Ireland said of the electorate. “We are there nine years. They want change but they don’t know what they want. But I still think we can pull it back.”

One Dublin TD said: “I came off the back of a very good set of Mass canvasses today, not reflecting the polls at all. Am I reading it completely wrong?”

A number of Fine Gael and Fianna Fáil TDs said the issue of Sinn Féin being in government had begun to register with older voters opposed to such a prospect, particularly after weekend newspaper coverage.

However, some Fianna Fáil TDs said they were criticised on the doorsteps for ruling out coalition with Sinn Féin.

Sinn Féin leader Mary Lou McDonald on Sunday again asked voters to give her party a chance and said its poll ratings are “reflective of an energy and a momentum for Sinn Féin and for change”.

Sinn Féin has called for Ms McDonald to be allowed into the final televised debate of the campaign, which is between Mr Varadkar and Mr Martin on RTÉ on Tuesday night.

RTÉ is expected to make a decision on the matter on Monday. Mr Varadkar said Ms McDonald’s participation would allow for scrutiny of Sinn Féin policies, while Mr Martin said he had “no difficulty” with a three-way debate. Labour has requested that all parties who may enter into a post-election coalition be included.

1 ‘Frustrated and angry’: Thousands march in Dublin to protest death of George Floyd
2 Covid-19: Easing of restrictions ‘unlikely’ to be speeded-up
3 Coronavirus: One more death in Republic as expert warns house parties are ‘disaster’ for containment
4 US: Trump threatens to deploy military to end protests
5 Schools may reopen in July for children with special needs
Real news has value SUBSCRIBE