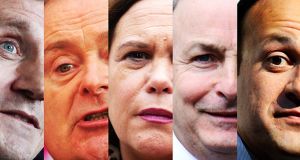 An economy that is the envy of Europe, at least in terms of GDP growth in recent years, is not translating into votes for Fine Gael, the party that has overseen a revival in our economic fortunes. The party is rewarded with just 23 per cent of first-preference votes in the latest Irish Times/Ipsos MRBI poll, its lowest rating since the 2016 General Election.

In contrast, Fianna Fail have held steady on 25 per cent, taking top spot for the first time in three years. The real gainers, however, are Sinn Féin, up seven points to 21 per cent.

1 Costa living: ‘Move home to Ireland? I’d hate it’
2 Co Clare houses surrounded by water evacuated as rainfall warning issued for most counties
3 Coronavirus: Global concern grows with sharp rise in infections outside China
4 ‘I wouldn’t be here without it’: The importance of exercise to teenagers
5 Portraying Sinn Féin as a dangerous party is a political strategy
6 The Boris bridge: Will Johnson’s ‘vanity project’ ever happen?
7 ‘The IRA has gone and they are not coming back. That’s the reality’
8 Steve Coogan: ‘Come Out, Ye Black and Tans is two fingers to the British’
9 Anti-Irish bigotry in Britain has not gone away
10 Boris Johnson's new immigration regime will damage much more than industry
11 Jennifer O’Connell: Why are women in midlife so unhappy?
12 When the RIC opened fire on a crowd in Ennis during the Clare grain riots
13 Ireland suffer Twickenham torture yet again as England dominate
14 ‘I never truly understood what community meant until I moved to Donnycarney’
15 Johnson orders Brexit team to ‘get around’ Northern checks protocol
16 ‘Swedish people don’t worry about buying a home until their late 30s’
17 David McWilliams: Germany needs a new business model
18 Bank leaked my loan request to family who tried to rip me off
19 Is my drunken, abusive husband capable of change?
20 Pat Leahy: Fianna Fáil and Fine Gael will not crawl off and leave McDonald the stage
21 Andy Farrell finds a home from home
22 Sinn Féin to hold public meetings around country to rally support for government efforts
23 Easy homemade pizza that your kids will love
24 MV Alta: The unmanned voyage of the Ballycotton ‘ghost ship’
25 Would you kill one person to save five? Depends if you’re a millennial or not
26 Archbishop: Sex abuse of women by L’Arche founder ‘reprehensible’
27 Paul Flynn: How to cook the perfect chowder – don’t use flour and keep it simple
28 Uncovering Ireland’s lost field names before it’s too late
29 L’Ecrivain, Derry Clarke’s Michelin-starred Dublin restaurant, to close after 31 years
30 Limerick’s scoring threat on full view as they close in on semi-finals
31 Bernie Sanders cements lead in Democratic race after win in Nevada
32 Ryanair’s Michael O’Leary under fire for comments on Muslim men
33 Gardaí wish to speak to taxi driver after girl dies in Cork car crash
34 Drug dealer loses codes for €53.6m bitcoin accounts
35 ‘IRA has gone away’: McDonald responds to Garda Commissioner’s comments
36 Mastercard to create 1,200 new jobs by expanding base in Dublin
37 Disappearance of pregnant refugees raises trafficking fears in Netherlands
38 Fintan O’Toole: Irish voters' actions are not populist – just sensible
39 Could a product from Lidl or Aldi change your life?
40 So you still have an eircom.net email? Here is what you need to do
Real news has value SUBSCRIBE