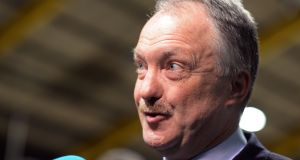 The scandal over TDs voting for absent colleagues meant Sean Haughey (58) got a promotion, from spokesman on European Affairs to foreign affairs spokesman, after Niall Collins lost his role in the wake of the controversy.

The son of late former taoiseach Charlie Haughey, he was a Senator for five years from 1987 before being elected to the Dáil in 1992, a role he held until 2011. He also held a number of minister of state portfolios, including in adult education, youth affairs and educational disadvantage as well as lifelong learning and school transport.

When he lost his seat after the economic meltdown, he successfully ran for Dublin City Council in 2014 and then won back his Dáil seat in 2016.

The low-key TD is well informed on European matters and Brexit in his Dáil contributions. He is a prodigious worker in the constituency, where the family name both helps and hinders.

He was educated at St Paul’s College, Raheny, and studied economics and politics at Trinity College Dublin. He is married with four children and is a member of Parnells GAA Club.

1 Covid-19: Travel restrictions to stay and 'green list' put on hold amid fears of second wave
2 Taoiseach ‘disappointed’ he only learned of Barry Cowen’s driving ban on Friday
3 Coronavirus claims one more life and 11 new cases reported in Republic
4 Bobby Storey: The IRA's planner and enforcer who stayed in the shadows
5 ‘Unseasonably’ windy weather set to buffet Ireland
Real news has value SUBSCRIBE