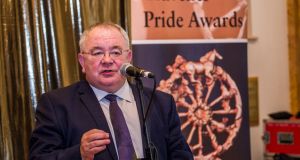 From a farming background, in 1997 he decide to have a tilt at the Seanad as a candidate for the Agricultural Panel, but lost again.

Showing indefatigable spirit he went again for the Seanad in the by-election held in June 2000, after the death of Senator Patrick McGowan and this time won.

Ó Fearghaíl won a Dáil seat on his fifth attempt, at the 2002 general election, when he defeated the sitting Fine Gael TD Alan Dukes.