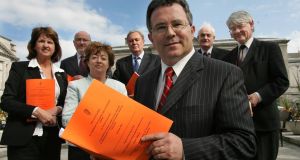 Chairman of the Public Accounts Committee in the last Dáil, Seán Fleming (62) was first elected as a TD in 1997.

In the early years of his political career, he served a dual mandate for four years after being elected to Laois County Council in 1999.

A married father of one, he is a chartered accountant, having studied commerce at University College Dublin.

His background in accounting resulted in him being appointed to the Oireachtas Finance and Public Expenditure Committee.

Prior to his career as a public representative, he served as the party’s national financial director.

From a small village called the Swan, Fleming has always been heavily involved in the local community. He is a former chairman of Castletown Tidy Towns Committee and was a treasurer of the local GAA club.

During his role as chairman of the PAC, Fleming sought answers to a number of controversies including financial irregularities in the Football Association of Ireland and a €1.8 million printer.