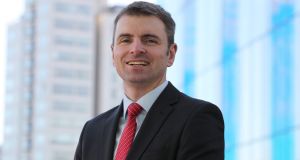 Ruairí Ó Murchú, who lives in Dundalk, Co Louth retained the Sinn Féin seat in the general election vacated with the retirement of Gerry Adams.

He was elected on the first count with 12,491 votes, exceeding the quota by 713, alongside his party colleague Imelda Munster who topped the poll with 17,203 votes.

Ó Murchú has worked for Sinn Féin locally in Co Louth and in Leinster House. He was co-opted onto Louth County Council in 2017 and was elected to the council again in the 2019 local elections, on the first count with 1,423 votes, coming third.

He grew up in Knockbridge and lived in Blackrock outside Dundalk for a number of years. He attended primary school in Muirhevnamor, the Gael Scoil and St Joseph’s National School in Dundalk, where his father Gerry Murphy was principal.

Married to Annemarie, Ó Murchú – a computers graduate of Dublin City University and Griffith College Dublin – is father to two sons and one stepson. In his spare time, he enjoys boxing, Brazilian jiu jitsu, kickboxing, running and mountain walking.