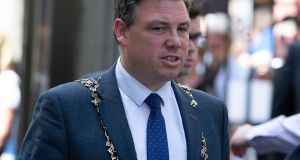 The incumbent Lord Mayor of Dublin Paul McAuliffe (43) has served as a Fianna Fáil councillor since 2009, but originally sought election to the council in 2004 for the Progressive Democrats, though was unsuccessful.

As Lord Mayor he chaired council meetings with particular skill and was instrumental in securing agreement of the Green, Labour and the Social Democrats in forming a ruling group with his party following the local elections last year.

He successfully steered some controversial projects through the council including the redevelopment of O’Devaney Gardens for housing.

He was selected to run for Fianna Fáil in the Dublin North-West constituency in the 2016 general election, but lost out that time to Fine Gael’s Noel Rock.

This time out, the result was reversed, no doubt assisted by the profile boost of the mayoral chain.

A Finglas native he was educated at De La Salle Primary School, Beneavin College Secondary School and the National College of Ireland.