Election 2020 outtakes: Fianna Fáil gets lost in the post 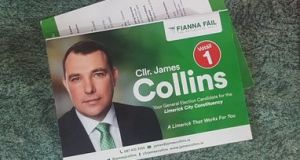 Fianna Fáil is backing the M20 motorway link-up between Cork and Limerick, but is it working on even closer ties between the two cities?

Leaflets asking for voters to tick Micheál Martin and Michael McGrath on the ballot paper have been posted to homes in the Treaty City – some distance from the Cork South-Central constituency where they are seeking re-election.

One voter in the Prospect area was urged to give the pair his first and second preference in the order of his choosing.

Meanwhile, homes in Co Clare have received pleas in the post to vote for Fianna Fáil’s councillor James Collins – who is standing in Limerick.

Either someone’s had a bad day at the Fianna Fáil office or a radical shake-up of the electoral boundaries is being planned.

Why did the chicken...

Kissing babies on the hustings is rule number one in the politician’s electioneering handbook.

But it appears the age-old practice is on the wane and would-be TDs prefer to be snapped with animals in an attempt to show off their warm and cuddly side.

Fine Gael Senator Neale Richmond, standing in Dublin Rathdown, is looking for a lead by posting pictures of himself with pooches online.

Independent Michael McNamara, seeking a seat in Clare, claims even the swans in Lough Derg are backing him.

While over in Offaly, Barry Cowen tweeted a photo of a chicken wearing his Fianna Fáil rosette.

Even the dogs in the street.... #GE2020 #lookforward pic.twitter.com/TWJvJPOS3d

Out and about in Clara yesterday and it appears FG chickens coming home to roost !!! pic.twitter.com/ST5BL20KhT

O’Donovan’s digging match with the Greens

If Fine Gael is eyeing up a coalition with the Greens, it appears it is going the wrong way about it in Limerick.

A week after Fianna Fáil complained about Leo Varadkar using an IDA event to score political points, Minister of State for Finance Patrick O’Donovan has been accused of “hijacking” another non-political event for electoral gain.

Green councillor Seán Hartigan left the European Green Leaf ceremony in Limerick’s City Hall “in disgust” claiming O’Donovan used the occasion to “discredit” his party with a “party political broadcast” from the podium.

“He was making out that Fine Gael were greener than green,” he told the Limerick Leader.

“He said they had fixed the economy and were now going to fix the environment.

“He took every possible dig he could at the Greens ...

“It was blatantly obvious that it was dig after dig at the Greens.”

24 – The top speed, in km/h, at which people could travel on unregulated e-scooters and other devices, should the Greens get into government and implement their manifesto.

Love but no marriage

Spare a thought for Varadkar’s partner Matt, had he been planning a surprise proposal on St Valentine’s Day.

The Taoiseach appears to have intimated in a campaign video that the only marriage on his mind is between his party and potential coalition partners.

In a video posted to Twitter, in which he answers what he says are the most frequently asked questions about himself on Google, Varadkar asks himself is he married?

“I’m not,” he answers himself. “I’m in a long-term relationship with my partner Matt – but no plans to get married at this stage.”

Alan Shatter’s acrimonious break-up with his formerly beloved Fine Gael is showing no signs of healing.

The former minister for justice, whose law practice specialises in divorce, has launched yet another tirade against his erstwhile political family.

This time, he has taken up the case of Jude Perry, the Fine Gael member expelled and then hastily reinstated to the party, over helping his father – former Fine Gael minister of state John Perry – campaign as an Independent in Sligo-Leitrim.