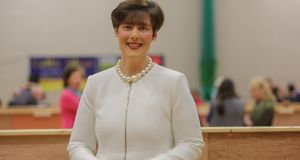 Norma Foley: In the year 2018/2019 she served as mayor of Kerry. Photograph: Valerie O’Sullivan

Since 2004, Foley has represented the people of Tralee Municipal District on Kerry County Council, topping the poll in last May’s local elections.

She has also served on Tralee Town Council, and held the position of mayor of Tralee on three occasions, most recently in 2017/2018. In the 2018/2019 year she served as mayor of Kerry.

Foley is the daughter of the late Denis Foley, who served as a TD for the constituency for 18 years, broken up by a three-year stint as a senator.

It is her second run at the Dáil, having been on the Fianna Fáil ticket in the 2007 election, when she was selected over colleague Brassil.

A teacher by profession, she is married to fellow teacher Denis Maguire.