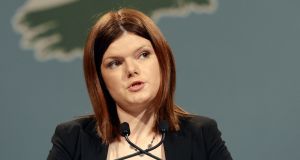 A real example of never giving up, Kathleen Funchion was first elected to the Dáil in 2016 on her fourth attempt. The 38-year-old, viewed early in the election campaign as vulnerable, retained her seat with the help of the Sinn Féin surge.

Prior to her 2016 Dáil election, she worked for trade union Siptu. She was formerly married to the party’s Waterford TD David Cullinane, and has two sons aged 12 and eight.

She was a member of Kilkenny County Council from 2014 to 2016. She is the party’s spokeswoman on children and youth affairs, having previously held the education portfolio.

She is low-key in her approach, has consistently pushed childcare as an issue and highlighted the need to make politics more child-friendly. She has said the biggest challenge for her was juggling her role as a TD with having children.