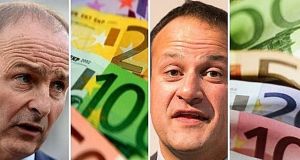 FF sources said housing policy would include ‘largest public house-building programme in the history of the State’, while Taoiseach Leo Varadkar warned of the prospect of an FF administration.

The big parties will unveil policies involving billions in spending for key areas of housing, health and childcare as focus of the general election campaign shifts to policy.

On week two of the campaign Fine Gael and Fianna Fáil have signalled pledges to raise significantly spending on public services and provide generous tax cuts when their manifestos are published later this week.

Both insist their plans will stay within European Union fiscal rules and Department of Finance limits. These will allow €11 billion of additional spending over the next five years.

Fianna Fáil is also set to promise an extra €2 billion spend on housing as part of its policy, which is to be announced on Tuesday. The party’s health policy announcement on Monday will also commit hundreds of millions of euro to recruiting additional doctors and nurses, reducing waiting lists, bottlenecks and improving mental health services.

Sources confirmed it will include: an additional five million home-help hours; double funding for the National Treatment Purchase Fund to €200 million a year; reverse pay inequality for consultants hired after 2012; and promise recruitment of an extra 4,000 nursing staff over five years.

Fine Gael is to set out an expanded help-to-buy scheme this week for younger people attempting to get on the housing ladder. Party sources said this additional spending would be “fully justified” because “now we know that it works”.

Fianna Fáil sources said its housing policy would include the “largest public house-building programme in the history of the State”. The party has also promised an SSIA-style savings scheme for first-time buyers, which would mean the State adds an extra €1 for every €3 saved up to a limit of €10,000.

The party has said all policies to be announced will be “fully costed”.

Opposition parties have said that they will rebut the claim of Fine Gael during the first week of the campaign that it is the only party with detailed policies.

Sinn Féin will announce housing and childcare policies this week, but will wait until January 28th to publish its manifesto.

Labour will launch formally its campaign on Tuesday ahead of announcing what it describes as comprehensive policies on global warming, childcare and the economy. The Green Party will unveil its manifesto next Saturday.

An increase to the pension age, which will next year rise to 67, has become a prominent issue in the campaign with many politicians encountering stories on the doorstep of people who have had to retire and sign on for Jobseekers’ Benefit because of the change. The issue was first highlighted by Sinn Féin and Fine Gael, Fianna Fáil and Labour have now pledged to address it if in government.

A weekend opinion poll showed Fianna Fáil (32 per cent) with a lead of 12 points for over Fine Gael (20 per cent).

However, sampling for The Sunday Times Behaviour and Attitudes poll was conducted before the election was called and at a time when controversies over record trolley numbers, and the RIC commemoration, were at their height.

Asked about the poll, Fianna Fáil leader Micheál Martin said the battle between Fine Gael and his party will be “closely fought”. And he added that the outcome of the election would be decided in the last days of the campaign.