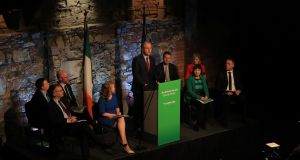 Fianna Fáil would hold back more than €1 billion of the €11 billion available over the next five years if it is in government and increase the amount of money allocated to the State’s rainy day fund annually.

The party on Friday published its general election manifesto, which outlined what its tax and spending priorities would be over the next five years.

Party leader Micheál Martin set out a series of proposed tax changes and spending commitments during the launch in Dublin’s Smock Alley Theatre.

Fianna Fáil committed to a four-to-one split in favour of spending increases over tax cuts during the lifetime of the next government.

Mr Martin, however, insisted a government led by him would be prudent in its management of the public finances.

On the €11 billion of unallocated resources expected to be available over the next five years, the manifesto says: “We will hold back €1.2 billion of the €11 billion available financial resources to fully account for demographic pressures, non-forecast spending requirements and the risks facing the economy. This leaves €9.8 billion for expenditure and tax measures.”

“This will be subject to the Exchequer account being in surplus...and will bring the entire pot in the rainy day fund at the end of 2025 to €5.3 billion,” it says, adding that the surplus allocation “does not come out of the €11 billion additional resources”.

There would also be a €600 rent tax credit and a €2,000 childminders tax credit. Capital gains tax would be be reduced from 33 per cent to 25 per cent and the party would also establish a commission on taxation to examine the system as a whole.

Fianna Fáil says it would also establish a commission on pensions and that an increase in the pension age to 67, due to kick in next year, would be deferred at “a cost of €217 million”. A transition payment for those aged over 65 who are yet to qualify for the State pension would cost €150 million.

On health, Fianna Fáil says it would spend €2 billion extra over the next five years on measures such as doubling the funding for the National Treatment Purchase fund to €200 million; increasing hospital bed numbers and it would “aim for four hour target wait for emergency departments”.

Other health measures pledged include an office for budget responsibility being put in place in the Department of Health; 1,000 extra consultants being hired over the term of the next government at a cost of €223 million; the recruitment of 4,000 extra nurses; an extra five million hours of home care support at a cost of €260 million over a term in office and a €10 top-up for people with disabilities in receipt of certain welfare payments.

In the justice sector, Fianna Fáil would increase the numbers in An Garda Síochána to 16,000 at a cost of €115 million and set up a “rural crime bureau” and a public transport unit within the force.

The manifesto also has a section on “tackling the national drugs and gangland crime problem head on” in which Fianna Fáil says it would “bring forward laws similar to those that were brought in to deal with the Provisional IRA”.

“Under new laws , the belief of a chief superintendent as to the involvement of an individual in gangland activity will be admissible in evidence,” the manifesto says. Harsher punishments would also be introduced for those who buy drugs from minors.

Carbon tax would be increased to €80 per tonne and a new national infrastructure commission would be established to examine “30 year decarbonisation planning”.

“The priority of the commission would be to oversee the long term plans for: decarbonising Ireland; a strong public transport network that balances the economic needs of the country and the development of the rural regions; making Ireland an IT nation with proper telecommunications connectivity and a secure, balanced energy mix.”