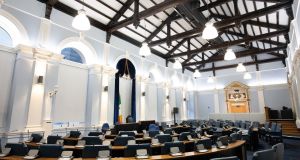 More than one-third of the Seanad’s 60 Senators, including 11 former TDs, are running for the Dáil in the general election. File photograph: Tom Honan

More than one-third of the Seanad’s 60 Senators, including 11 former TDs, are running for the Dáil in the general election.

Twenty-three members of the Upper House have been selected by four of the political parties to run in the election, giving credence to the infamous description of the Seanad as a consolation prize for TDs who lose their seats and a nursery for aspiring politicians.

Fine Gael has the most Senators contesting at 13; Fianna Fáil has four; Labour is running three; Sinn Féin two and the Green Party one.

While the 32nd Dáil may have run its course there is still a bit of life left in the 25th Seanad, technically at least, as it will have to sit next week, if only to adjourn. The Upper House is obliged to be in session next Tuesday because that was the date Senators agreed on as the next sitting after the Christmas recess.

Under standing orders the House only adjourns for an election when it agrees it should be suspended “sine die” (without a date set for return).

NUI Senator Michael McDowell, who is not seeking to become a TD again, said the Upper House should be “more than a stepping stone for those seeking election or re-election to the Dáil”. He suggested that the Seanad could continue to sit beyond next week if Senators so decided. The Seanad election must take place within 90 days of the Dáil election being called.

The Green Party candidate is Senator Pippa Hackett, who was elected unopposed two months ago after Grace O’Sullivan was voted into the European Parliament. Ms Hackett said she was “fortunate” to have an opportunity and a “good chance” to win a Dáil seat in Laois-Offaly.