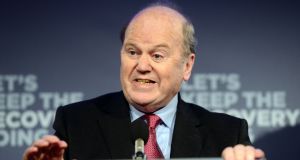 Minister for Finance Michael Noonan has claimed he has caught Fianna Fáil out on a “massive deception” in its election manifesto, saying the party has made commitments to increase public pay without funding them.

With just nine days to go to polling day, Fine Gael has gone on the attack, following disappointing poll ratings. Fianna Fail has accused the Government party of negative campaigning.

Mr Noonan said the figures in the Fianna Fáil manifesto made no provision for public pay increases after the Lansdowne Road agreement expires in 2018.

The Minister’s attack was rejected last night by Fianna Fáil, which has made a virtue of allocating less funding than Fine Gael for new tax cuts and spending increases in coming years.

The Fine Gael manifesto sets aside €1.12 billion for “other” purposes “including pay and pensions post-Lansdowne Road agreement” in its €10.1 billion plan.

Although the Fianna Fáil manifesto sets out principles to be followed in any future public pay negotiation, there is no allocation for pay beyond Lansdowne Road commitments in the €8.36 billion it has already set aside from its €8.6 billion plan.

“Fianna Fáil wants voters to think they’ve changed since they crashed the economy and destroyed 300,000 jobs.

“But I’m calling them out on a massive deception in their election manifesto,” Mr Noonan said.

“While pretending they’ve learnt the lessons of the past, they are actually hiding the true cost of all the spending promises they are making.”

In its manifesto Fianna Fáil said it would target future public pay increases on low- to middle income-earners and ensure improvements in the take-home pay of public servants were in line with general wage improvement.

The party also promised to repeal the Financial Emergency Measures in the Public Interest Acts, the legislation used to cut public pay after the crash.

Responding last night to Fine Gael’s attack, a Fianna Fail spokesman said it was a “complete misrepresentation” to say that its commitments equate to “any particular level of pay increases post-Lansdowne Road.”

He added: “That would be subject to negotiation based on the prevailing economic conditions at the time.

“That would be in the context of very signficant other increases to take-home pay, including changing the USC, the abolition of water charges and measures such as a reduction in the threshold for the Drug Payment Scheme.”

While Fianna Fáil’s €8.6 billion plan leaves €240 million in unallocated funding, the party has said it would not deploy an additional €1.5 billion from the anticipated loosening of EU budgetary targets.

“We have not provided at this stage a specific figure for public sector pay increases from 2019 onwards,” said the Fianna Fáil spokesman.

He pointed out that Mr Noonan had said on RTÉ radio that no Minister would reveal a negotiating position by providing an upfront figure for pay as that would be the starting point instead of the finishing point.

The Fine Gael position is that that does not preclude a general allocation in reserve.