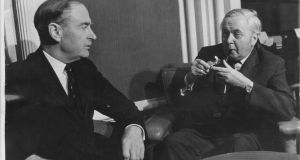 Declan Costello had roses growing on the front wall of his home in Donnybrook. The garden was immaculate, elegant and deliberate, a little like Declan’s dress sense with his three-piece suits and silk handkerchiefs. I was at a loss to know where to put my bicycle. It was the spring of 2008 and this was the first of many meetings with Costello, Garret FitzGerald and Liam Cosgrave as part of my research for a book.

“You came here on your bicycle?” Costello took a step back from his door to look at my second-hand gent’s mountain bike. It was incredible to him that a woman had cycled across the city to see him, on that.

The former Fine Gael TD, attorney general and president of the High Court felt he had put me to unnecessary trouble.

The bicycle became a factor in where to meet Cosgrave. The other inconvenient complication was the delicate issue of the subject matter of my book – corruption in Ireland. I broached the topic directly. I had no interest in speaking to the former taoiseach about his son. Two years previously, Liam jnr had been in court facing corruption charges (the trial eventually collapsed, with the charges struck out).

On this reassurance, Costello agreed to write to Liam snr, urging him to meet me.

There was one condition: it had to be at a Dublin city centre location so I could get there by bus.

Cosgrave was 88 then, older than the State itself, the son of Ireland’s founding father, WT Cosgrave. The physical onset of age was evident as he walked with a slight stoop. His cerebral faculties were impeccable as he moved seamlessly from one historical event to another.

We did several tours together of political episodes through the decades. Each session would end with the words: “I have to get back to Vera.” His beloved wife, who died last year, was the centre of his world.

Cosgrave’s modus operandi was to begin each story with where such-and-such was from, who they were married to, how he knew them and why they were connected. A country trait in an out-and-out Dubliner.

A conversation about Henry Grattan Esmonde, a senator from 1922, detoured into observations about his son Ozzie, who “didn’t get married”. Cosgrave remembered the date Ozzie died and the Wexford byelection lost by his stepbrother Johnny from Ballinastraw. Johnny eventually became a TD but later resigned. “He was a fussy little fella,” Cosgrave said. Listening back to the tapes, it is hard not to smile hearing him accentuate the word “resign”, a concept absolutely alien to him.

Cosgrave had moved from the 1920s to the 1960s without taking a breath.This would be a typical exchange. Later, I would check all the dates, places and names he mentioned. Every single one was spot on.

Cosgrave told stories as if they had happened yesterday, not more than half a century ago. After a while, I conceded they were not relevant to my research, but he was a joy to listen to. I was eavesdropping on history. For example, all these years later, he still could not get over the fact that, in 1973, the IRA landed a hijacked helicopter in Mountjoy Prison and three prisoners had escaped. “A helicopter! In Mountjoy! And they made a song about it!”

When the Royal Irish Academy launched its digital humanities observatory, I accompanied him to listen to a previously unknown recording of his father. It was a brief speech by WT Cosgrave, whom Cosgrave generally referred to as “the boss”. The then president of the Irish Free State executive said on the tape that he was just back from Paris having signed the 1928 Kellogg-Briand Pact, which renounced war as an instrument of national policy.

His father’s tone was deliberate, with a hint of hesitation towards what would have been unfamiliar technology. When we took off the headphones, Cosgrave smiled.

His reaction was not that of recognition of an important historical event involving an Irish prime minister. He was seeing it through the eyes of the child he was. He was eight years old when his father was in Paris. He was smiling because he was thinking back to when his father had returned from the United States, on similar government duty, bringing back presents of wristwatches for him and his brother.

Cosgrave, as leader of the opposition, was initially a lonely figure in Fine Gael when he decided to support the Fianna Fáil government’s emergency anti-terrorist legislation. The liberal wing of Fine Gael, led by FitzGerald, opposed the stringent laws on civil-liberty grounds. The debate went into the night. As news trickled into the Dáil that a loyalist bomb had gone off in Dublin, Cosgrave was nowhere to be found. Fine Gael deputies were congregating in the corridor outside the Dáil, unsure of what to do.

FitzGerald recounted how a journalist found Cosgrave and asked: “Are you going upstairs again to take over? They’re all on your side now, they’ve changed their position.” A classic answer by Cosgrave: “Can I finish my ice cream first?”

In 2008, three years before they both died, FitzGerald and Costello joined me for a dinner at the Shelbourne Hhotel for a joint -interview for The Irish Times to mark the 75th anniversary of Fine Gael. Costello brought up Cosgrave’s infamous 1972 ardfheis speech when he rounded on his ideological rivals within Fine Gael.

Costello: “I have a strong recollection, Garret, of Liam having a go at us, the Celtic Tigers, do you remember that? Remember, at the ardfheis?”

FitzGerald: “Not the Celtic Tigers . . . it was a hunting metaphor.”

FitzGerald: “When you are on the platform in the Mansion House, you can’t hear what other people are saying on the platform, everyone else hears it. I couldn’t quite hear what he said and I didn’t know whether to walk out or not.”

Costello: “Well I could hear it because I wasn’t on the platform [FitzGerald bursts into laughter], I was standing down at the back. This extraordinary . . . and I just couldn’t believe my ears! And who is he talking about . . .”

Cosgrave had said: “Critics are now like mongrel foxes; they are gone to ground but I’ll dig them out, and the pack will chop them when they get them.” I asked if this was an off-the-cuff remark.

Costello said: “He had prepared it and decided to do it.”

FitzGerald and Costello fondly recounted the rows they had with Cosgrave. Both agreed he had been a good chairman of the 1973-1977 government. “He ran the government very well, because he had a very disparate group,” Costello said.

Other people will write about Cosgrave’s politics and legacies. For me, he was an old man looking back on his remarkable life with a twinkle in his eye, sharing anecdotes about his past. That past was my history because they were stories about Ireland.

The Cosgrave, FitzGerald, and Costello families had a special relationship dating back to the first government of 1922. Today the last of that generation is gone.

I’d like to think that the three of them are sitting down to that dinner now, chuckling away about ice cream and mongrel foxes.