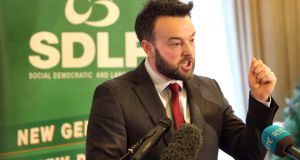 SDLP leader Colum Eastwood during the launch in Derry of the SDLP manifesto for the British general election. Photograph: Margaret McLaughlin

Mr Eastwood focused on Sinn Féin’s abstentionist policy from the House of Commons. He said the election “was an opportunity to send voices and votes to Westminster that can stand up for us and stand against the DUP”.

On Monday Sinn Féin leader Mary Lou McDonald said it was “fanciful and frankly dishonest” to say nationalist MPs could have influence in the “house of chaos” at Westminster.

However, Mr Eastwood said there was a real risk that if the same pattern of results repeated itself in this election, only the DUP would take seats and hold sway in Westminster. “This election is a chance to maximise the Remain representation across Northern Ireland.”

Mr Eastwood said the “threat of Brexit and Boris Johnson” loomed over this election. “There is a tendency in every election to define it as different. But I think people are very aware that this election is not only different – it is potentially decisive.

“Turning your back on Brexit and ignoring it won’t prevent it from happening. Preventing it means facing it head on – it means voting against it.”

Mr Eastwood warned that if Stormont was not quickly restored the “current semi-skimmed direct rule [from Westminster] could be very quickly replaced with a full-fat Boris Johnson version”.

“This election is about Sinn Féin’s empty seats and DUP’s empty promises, but it also has to be about an empty building in Stormont. Not one person in Northern Ireland has benefitted from the stalemate of our politics.”

He accused the DUP and Sinn Féin for more than 1,000 days of “abstaining from their responsibility of delivering a government for all of our people”, which had led to the current health crisis.

Some unionists have accused the SDLP of engaging in a “sectarian pact” over its decision not to stand in North Belfast, where Sinn Féin candidate John Finucane is seeking to defeat DUP deputy leader Nigel Dodds. Sinn Féin is in turn giving SDLP candidate Claire Hanna a clear run in South Belfast.

Mr Eastwood insisted the decision was motivated by SDLP support for the Remain position. “The SDLP make no apologies for making difficult decisions that are designed to protect this island and our people from the damage of Brexit.”

Foyle is one of the cockpit constituencies where Sinn Féin and the SDLP are in a tight battle for the seat between outgoing MP Elisha McCallion and Mr Eastwood. In 2017, Sinn Féin defeated former SDLP leader Mark Durkan by 169 votes.

Mr Eastwood said that a “couple of seats” could be critical in determining who would be in the next British government.

Asked could the SDLP support Mr Johnson if doing so would mean British government largesse for Northern Ireland, he replied “no.”

Asked would he support Jeremy Corbyn as British prime minister, he said the SDLP wanted to “see a Labour government much more than I want to see a Tory government”, while adding “we will always do whatever we have to do to knock Boris Johnson out of government”.

Mr Eastwood said the “Tories are gearing up to try and force through an amnesty for soldiers – which we know by law would in all likelihood extend to and cover all parliamentary organisations”.

“This would be the ultimate betrayal of the truth and justice that victims were promised. SDLP MPs will stand by those victims, and ensure that the mutual interests of those who inflicted the violence are not permitted to ride roughshod over the interests of those who suffered as a result of it. SDLP MPs stopped an amnesty before and we’ll do it again.”