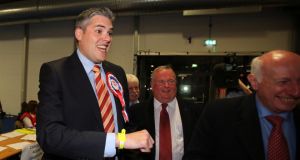 The Democratic Unionist Party (DUP) has regained the MP seat for East Belfast after its candidate Gavin Robinson saw off the challenge of incumbent Naomi Long of the Alliance Party.

From the beginning, it was anticipated that this would be one of the most hotly-contested constituencies as the DUP looked to wrest the seat back from its rivals following a humiliating defeat in 2010.

The odds seemed stacked in Mr Robinson’s favour given the cross-party pact the DUP had engaged in prior to the election, which saw other unionist candidates stand aside to afford him a clear run at victory.

He duly obliged with a haul of 19,575 votes in an area that has traditionally been regarded as a unionist heartland. However, Ms Long put in an admirable showing and polled some 4,000 votes better than she had done when taking the seat five years ago.

In his victory speech, the new MP thanked party leader Peter Robinson - who was acrimoniously unseated by Ms Long in the last parliamentary elections following a three-decade stint in the House of Commons - and launched a scathing attack on Sinn Féin.

“I am delighted that the last five long years are over, that a new day has dawned in East Belfast. When people were offered the choice as to whether they wished to go forward or back, they chose forward.

“They chose forward with somebody they could trust… rather than back a party that are only interested in offering us a future if we share their view, and when people were offered the choice to vote for progress and the union over backward abstention they chose the progress,” he said.

A strong turnout of 63 per cent - up 4 per cent from 2010 - appeared to favour the cross-unionist vote, and Conservative candidate Neil Wilson also put in a respectable showing with 1,121 votes.