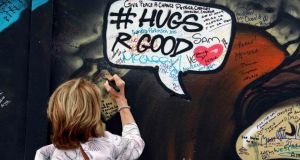 A tourist writes a message on a section of the Peace Wall in the Shankill area of west Belfast in Northern Ireland. Photograph: Cathal McNaughton/Reuters

DUP leader Peter Robinson has confirmed he will use procedural manoeuvres in Stormont to prevent ministries vacated by the Democratic Unionist Party (DUP) going to Sinn Féin or the SDLP.

Mr Robinson stepped aside and three other DUP ministers and a junior minister resigned from their positions on Thursday amid the deepening crisis over an alleged IRA connection with the killing of Kevin McGuigan in Belfast.

The rules dictate that vacant positions can be offered to other Executive parties.

“I don’t plan to allow ministries to go to Sinn Féin and the SDLP. Why should they be rewarded?” Mr Robinson said last night.

It is understood the DUP will nominate its own party representatives for the vacant ministries each week, who will then immediately resign.

The tactic, renewed each week, will prevent nationalists from filling the roles and will also allow space for negotiations to find a solution to the impasse.

The row over the alleged continuing existence of the IRA has poisoned relationships between the two largest parties in the powersharing Executive, the DUP and Sinn Féin.

It has led to inertia in the Assembly and powersharing institutions.

Talks between the five main parties, convened by Minister for Foreign Affairs Charlie Flanagan and Northern Secretary Theresa Villiers, will start on Monday.

There is now growing expectation the five parties will participate, although the DUP has yet to decide if it is satisfied with the basis for the talks. UUP leader Mike Nesbitt all but confirmed his party would participate, albeit it is also seeking certain conditions.

Sinn Féin, the SDLP and the Alliance have confirmed they will attend.

Mr Robinson told the BBC that a short span, between three and five weeks, “should be more than sufficient to deal with all the necessary issues”.

To that extent, Sinn Féin’s Deputy First Minister, Martin McGuinness, has concurred saying he expected the talks to continue for a similar period.

He said he had no intention of resigning and triggering an election, which he said the unionist party wanted him to do.

Mr Flanagan told The Irish Times last night he expected all parties to attend and said he was encouraged that each party had stated it was of the view an agreement could be reached.

He and Ms Villiers will be in regular contact over the course of the weekend.

He warned there could be “be no room for brinkmanship” in the talks, saying they would need to focus on finding permanent and workable solutions.

British prime minister David Cameron said he was “extremely worried” about the crisis but expressed confidence there would be full participation.

The governments are trying to restore some level of trust between unionists and Sinn Féin after PSNI Chief Constable George Hamilton said the IRA still exists and was involved in Mr McGuigan’s murder.