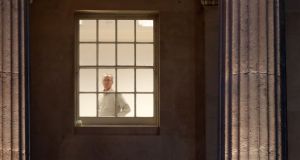 A further round of negotiations between the DUP and Sinn Féin broke up on Tuesday night without any agreement on how to restore the Northern Executive and Assembly.

DUP and Sinn Féin talks teams led respectively by Arlene Foster and Gerry Adams remained locked in negotiations throughout much of Tuesday but by 8pm those negotiations petered out without agreement.

DUP leader Ms Foster quit the talks at Parliament Buildings, Stormont around 7pm, according to sources. Sinn Féin negotiators and a number of the DUP talks team remained at Stormont until about 8pm when the main negotiations ended for the day without any sign of significant movement.

The talks are expected to resume at Stormont on Wednesday, added the sources, as the parties try to find an accommodation to restore the Stormont powersharing institutions.

Ms Foster is due back at Stormont on Wednesday morning.

Sinn Féin has insisted that any move to introduce a budget for Northern Ireland through Westminster would collapse the current round of negotiations to restore the Northern Executive and Assembly.

Northern Secretary James Brokenshire is this week due to outline to the House of Commons whether he believes the parties can strike a deal or whether these negotiations have failed and he therefore must begin preparing a budget from Westminster.

On Tuesday however senior Sinn Féin negotiator Conor Murphy warned any attempt by Mr Brokenshire to bring in a budget for the North though Westminster would crash these talks.

“We have made it clear that if a British Secretary of State stands in the House of Commons to move a budget then that is a clear statement that this phase of the talks process has failed,” he said.

SDLP Assembly member Nichola Mallon said she understood the legislation to introduce a budget would begin on November 13th in the House of Commons. Were that to happen it would mark “the beginning of direct rule” from Westminster, she said.

Ms Mallon called on the DUP and Sinn Féin to “come clean” and publish the papers they have been exchanging so that the public could determine “who is holding up progress here”.

“It couldn’t be more critical. Once you have a Westminster government preparing a budget . . . then you are looking at the beginning of direct rule, and that is a dark, dark day for every single person living here,” she said.

In recent weeks the DUP and Sinn Féin had got close to a deal but could not get it over the line.

The two parties have been bogged down over a number of issues including same sex marriage, dealing with the past and holding inquests into past killings of the Troubles. The main issue blocking a deal is over the Irish language with Sinn Féin seeking a free-standing Irish language act and the DUP insisting language legislation must also embrace Ulster Scots and other “cultural” matters.

One talks source said on Tuesday night that there had been “no real progress on rights issues”.

Asked was a stand-alone Irish language act still the bottom line for Sinn Féin endorsing a deal Newry and Armagh MLA Mr Murphy replied that he did not want “to get into the detail of the negotiations”.

“This is a very key time in relation to those and I want to make sure that we protect the ability to try and reach an agreement,” he said.

Mr Murphy acknowledged that there was a “credibility” concern if the talks continued to drag on. “We are very conscious of the credibility issue for these negotiations,” he said.

The Minister for Foreign Affairs Simon Coveney has been at Stormont over Monday and Tuesday. In a tweet he said that everyone was “working hard to get a deal across the line”.

Mr Brokenshire had set midnight on Monday as the deadline for an agreement. However late on Monday night he extended the deadline to allow more negotiations on Tuesday, stating that “further progress” was made on Monday.

He also disclosed that the DUP and Sinn Féin had made certain “additional requests” which the British government is now considering.

This was interpreted as the DUP and Sinn Féin seeking more money for the Northern Executive on top of the £1 billion that the DUP extracted from the Conservatives to prop up Theresa May’s government.

This raised a certain level of hope that the talks could yet succeed as a pattern of the many previous sets of crucial talks was for parties to present an additional “shopping list” of demands close to the conclusion of negotiations.

Mr Brokenshire did not provide details of what the DUP and Sinn Féin are seeking. It is understood that part of Sinn Féin’s request is for up to £150 million to deal with outstanding Troubles-related inquests.