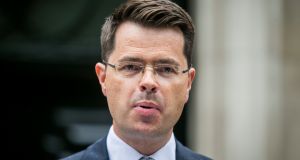 The DUP and Sinn Féin remained deadlocked on restoring powersharing at Stormont on Monday night as another deadline in the talks passed.

Northern Secretary James Brokenshire, who had set a midnight deadline for striking a deal on a new Assembly and Executive, said the North’s two largest parties would continue talks on Tuesday morning and that he would “reassess the position” on Tuesday night.

Mr Brokenshire said “further progress” was made during Monday’s talks and that the two parties made “certain additional requests of the UK government which we need to consider”.

“In light of this, I believe it is right to defer the assessment on whether to introduce legislation to parliament this week to enable an Executive to be formed.”

He had warned on October 19th that without a deal he would have to legislate for a budget for Northern Ireland at Westminster.

Sinn Féin president Gerry Adams, however, cautioned that if Mr Brokenshire started bringing in a budget at Westminster then this phase of the talks would end.

British prime minister Theresa May had earlier provided some wriggle room by indicating that the latest deadline could be stretched further into the week to determine if the DUP and Sinn Féin could end the impasse.

Northern Ireland politics has largely been stalled since the late Sinn Féin deputy first minister Martin McGuinness resigned in January at the height of the controversy over the botched Renewable Heat Incentive scheme.

Ms May’s spokesman said on Monday that progress had been made in the talks but that “there are still significant gaps which remain and we continue to work with them to overcome these”.

Minister for Foreign Affairs Simon Coveney was also present and offered to assist the two parties towards an accommodation on a wide range of issues such as dealing with the past, same-sex marriage and a bill of rights for the North.

The main obstacle to a deal remains Sinn Féin’s demand for a free-standing Irish language act which is at variance with the DUP’s insistence that any such legislation must be linked to other language issues such as Ulster Scots.

In a Twitter post Mr Coveney said Monday was an important day for Northern Ireland while adding that “with political will and a willingness to work together on all sides there is a deal to be done”.

The DUP has said it will not accept “a bad agreement cobbled together to suddenly suit the timetables of others” and called for Mr Brokenshire to set a budget. A DUP spokesman said it wanted to see an Executive set up and warned that Sinn Féin “will have to realise that an agreement will only be possible when they drop red line demands”.

“We will continue our discussions on the basis we believe devolution is best for Northern Ireland. Given Sinn Féin have dragged their feet over the last 10 months the Secretary of State should bring forward a budget to bring a measure of good government to Northern Ireland.”

Sinn Féin’s Conor Murphy said a deal can be done but it “needs to be a deal for all in our society and not just for the political leaderships of unionism”.