DUP and Sinn Féin ‘hopeful’ of deal to restore Stormont 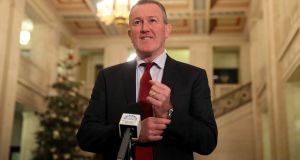 Sinn Féin and the Democratic Unionist Party (DUP) expressed confidence on Thursday that a deal would be reached before January 13th to restore the Northern Executive and Assembly as talks resumed at Stormont.

The Northern Secretary Julian Smith and the Minister for Foreign Affairs Simon Coveney are holding talks at Stormont with the North’s five main parties in an effort to restore the powersharing institutions before the deadline of Monday week.

Mr Smith and Mr Coveney held roundtable negotiations on Thursday morning with a further plenary taking place this afternoon. The two Ministers also were holding bilateral meetings with the parties to try to reinstate Stormont which collapsed almost three years ago.

Sinn Féin’s chief negotiator Conor Murphy said after the first roundtable meeting that the institutions could be restored relatively quickly and before the deadline.

“This agreement can be reached in short order. We don’t see any need to run this down to the wire on January 13th in some kind of dramatic way,” he said.

“The issues that we have been dealing with are well rehearsed, but what we need now is political will,” he added.

Mr Murphy said some of the key issues to be resolved related to the Irish language, the petition of concern, a programme for government and a financial injection from the British government for public services.

“This place can’t function if we can’t deliver for public services. So we can’t sit here and be an instrument of Tory austerity. We have to have sufficient public resources to be able to deliver services which recognise the particular circumstances in this part of Ireland and the difficulties that we face,” he added.

In regard to the outstanding issues he said: “None of them, I would think, need to be exhausted ad infinitum. We need to bring this to a conclusion.”

With another nurses strike due for Wednesday there is pressure on the parties to reach a deal before then.

DUP MP Jeffrey Donaldson said his party had been engaged in “very constructive” discussions on the outstanding issues and there was a “willingness on the part of all the parties to see this over the line”.

“I’m hopeful that we can on this and other issues reach a consensus, and that’s what we’re working towards,” he said. But he cautioned against an emphasis on doing a deal before Wednesday’s health strike.

“Deadlines and talking about going to the wire is never a sensible way to negotiate,” he said. “We want this done as quickly as possible, but we also want to ensure that the agreement is fair and balanced that it is sustainable.”

Asked if the DUP was now at the point where the text of a draft agreement could be published, Mr Donaldson said that “to be frank, I don’t think we’re at the stage yet where we can publish an agreement.”

Discussions, he said, were “ongoing on the issues”, which included the stability of any restored Assembly and the petition of concern. He said that the party “recognise that there is a need to tighten up on the use of the petition of concern, but I think all the parties agree it should be retained as an important safeguard for all minorities.

“We are not against reforming the petition of concern, in fact we favour reform, but we certainly want to see this important safeguard retained,” he said

While the mood at Stormont remained quite positive, political sources said a deal was unlikely this week, but that next week the remaining issues could be resolved.

Earlier, Tánaiste Simon Coveney warned agreement on the restoration of power sharing in Stormont must be reached in the coming days.

“We’re at the end game now, we’re running out of time.

“The stakes are very high in the next few days, we need to get this done,” he told RTÉ radio’s Morning Ireland.

Talks aimed at restoring the devolved government are to resume at Stormont on Thursday with less than two weeks for the parties to reach a deal or face fresh Assembly elections.

Each of Northern Ireland’s five main parties are participating in the in discussions.

Northern Ireland has been without a powersharing government at Stormont since January 2017, when the Assembly collapsed following a controversy over a botched renewable heating scheme.

The legislation which gives civil servants the power to keep Northern Ireland running in the absence of a devolved government expires on January 13th. Mr Smith has said the parties must reach a deal by then or he will call an election.

The latest round of talks on restoring Stormont ended without agreement before Christmas, with both Mr Coveney and Mr Smith blaming the DUP for scuppering the chances of a deal, a charge the DUP “flatly rejected”.

Speaking on Thursday, Mr Coveney said that for three years now while of course we had a peace process that’s still intact and in place “we have not seen the institutions of the Good Friday Agreement functioning and Northern Ireland has suffered as a result of that.

“Communities become polarised when there isn’t leadership coming from the top down in terms of political parties and of course we’ve had Brexit on top of that which I think has created an environment of tension and division in Northern Ireland as well, to put it mildly.”

Mr Coveney said that there is public pressure on the politicians to get things done. “The public is frustrated.”

The outstanding issues are said by all parties to be “on the margins”, and relate to matters such as an Irish language Act, the sustainability of any reformed Stormont, and reform of the petition of concern – a vetoing system that allows parties which have 30 signatures to block motions even if these motions have majority support.

DUP leader Arlene Foster said that as the talks recommence “we will be there and stand ready to restore devolution through a fair and balanced deal. A Northern Ireland that is going to keeping moving forward must be one where everyone feels at home, but must also be one where no one feels their culture is being marginalised.”