Dublin not happy, EU furious as UK move brings Brexit back into focus 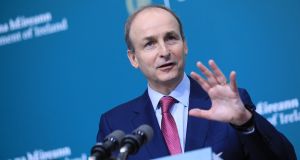 Brexit’s back. Well, actually, it never went away. But Brexit returns to the front page today following the announcement by the British government yesterday that it would unilaterally change Northern Ireland’s special arrangements.

London said it would extend the “grace period”, previously agreed with the EU to last from January to the end of this month, during which the requirement for checks on certain goods entering the North from Britain do not apply.

6 Q&A: Which Level 5 restrictions are being lifted from today?

12 Vaccination and modified behaviour point us back towards normality

13 Una Mullally: How to make Dublin’s north inner city better for the locals

20 Mary Coughlan revisits her past: ‘It was everywhere. Bags of cocaine, champagne and tequila’

21 ‘I’m cheating on my husband with a married man – can we ever trust each other?’

23 Covid-19 Vaccine Tracker: What's available in the Republic of Ireland and what else is coming?

25 School homework: Does it have any benefit at all?

28 My Bloody Valentine: Very loud, very fuzzy, and heading back to their Irish studio

36 Ken Early: It’s time for Alexander-Arnold to move to the middle

38 We would drop to our knees after our tea of soda bread, country butter and hang sandwiches

39 How to build a modern man: Helping boys to grow up happy