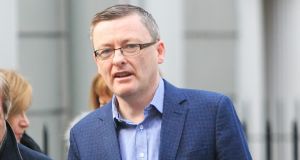 Local authorities in Dublin and Waterford are facing “unsustainable” funding cuts of €18.4 million because of reduced transfers from the Government, the Dáil has heard.

Local authorities in Dublin and Waterford City and County Council are among several councils set to be affected by a Government decision not to continue a compensation process from Irish Water.

In the Dáil on Thursday, Sinn Féin TD David Cullinane said that Waterford City and County Council is proportionately the council worst hit by declining transfers resulting from the move, with a 13.5 per cent cut, a sum of €3.3 million.

Mr Cullinane warned that local authorities would have to increase commercial rates as well as reducing services as a result, and that in Waterford cuts could affect funding for housing maintenance, roads, and festivals for local communities. He said Waterford could see an increase of up to 10 per cent in commercial rates.

“That is unsustainable. People were told when they paid their property tax that the moneys would be used to fund proper services, yet people in Waterford and Dublin will see services cut through no fault of their own,” he said.

Dublin city councillors on Monday refused to pass a budget because of these cuts. The Government has agreed to talks with the local authority to solve the impasse over funding to run the city in 2020.

The cuts result from a decision by the Department of Public Expenditure and Reform not to continue the compensation process from Irish Water to local authorities.

Mr Cullinane pointed to comments by chief executive of Dublin City Council Owen Keegan, who said cuts had to be made because the compensation would no longer be paid by the Government.

Mr Cullinane added: “I have spoken to the chief executive officer of Waterford City and County Council and he has the same view. This is a Government cut. Promises were made to compensate these local authorities but they have been left high and dry.”

Replying for the Government, Tánaiste Simon Coveney acknowledged that Waterford would be particularly affected, with a loss of 70 per cent of the income it had received from the compensation scheme.

Dividing the valuation of Irish Water among local authorities from 2020 will be based on population, similar to the process for other utility companies with national networks, he said.

He agreed that, with a gap in funding of €3 million, Waterford “is far less equipped to deal with such a reduction in income compared to the other impacted authorities, namely the four Dublin local authorities, as well as Wicklow and Kildare local authorities”.

The Tánaiste said exchequer funding for local authorities has increased in recent years, including to Waterford.