Drink-driving law passed in Dáil after bitter row over filbustering 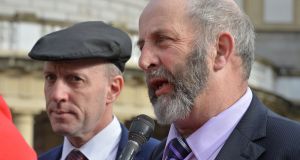 The controversial road traffic legislation has finally been passed after months of filibustering and heated debate in the Dáil when TDs accepted the Bill by 75 votes to eight.

There was a round of applause from the House and from groups in the gallery representing the families of victims of road traffic accidents.

“This is a sad day for rural Ireland, ” Independent TD Danny Healy-Rae shouted after the vote was declared.

Social Democrats TD Catherine Murphy called a halt to the debate by invoking a rule of the House to stop submissions on the Road Traffic (Amendment) Bill.

Independent TD Michael Healy-Rae had spoken for one hour and 15 minutes with some heated interventions from all sides of the House.

A number of other TDs spoke, and Ms Murphy invoked Section 68 of Standing Orders to call a halt after a row between Fianna Fáil transport spokesman and Independent TDs over their support for another Bill championed by Minister for Transport Shane Ross on the appointments of judges.

Fianna Fáil’s Robert Troy also blamed the Minister for the lengthy filibustering of the legislation and claimed it would not have happened had it prioritised the legislation over the judicial appointments legislation.

There were heated exchanges as TDs accused Independent TD Michael Healy-Rae of filibustering in the debate on a provision to the Bill where the owner of a car is committing an offence where a permit holder is allowed to drive their vehicle without a licensed driver with them.

More than 30 hours has been spent on debating the legislation and there have been repeated accusations of filibustering.

Fianna Fáil TD Declan Breathnach TD had said “we’re listening to nothing only verbal diarrhoea. The issue of stalling it is absolutely inappropriate”.

He said: “I might share some of the concerns of the Independent TDs” as a rural TD but added they had a duty to pass legislation and that there should be an informal arrangement to give everyone a chance to speak.

The law would also strengthen penalties for car owners who allow unaccompanied learner drivers on the road in their vehicles and provides for the seizure of cars used by lone learner-permit holders.

Mr Healy-Rae is one of a number of rural TDs who believes the legislation will ruin rural Ireland because learner drivers would not be able to get to work or college. “This Bill is pulling the car out from young drivers,” he said.

But Independent TD Tommy Broughan accused Mr Healy-Rae of “attempting to talk this Bill down” and said “if there is a general election he can do a deal with an incoming government that this Bill will never see the light of day”.

He said “80 of our fellow citizens have already been killed on the roads this year”.

Sinn Féin whip Aengus O Snodaigh asked the Ceann Comhairle to confirm he could, under standing orders, ask a TD to leave the House if they were not adhering to standing orders.

Meanwhile Taoiseach, Leo Varadkar said he was pleased to see the Bill finally pass after months of debate but he was critical of a small handful of rural TDs who had sought to obstruct the move.

“I want to praise Minister Ross for his leadership in getting the legislation through .We absolutely understand that there are concerns, particularly in some rural areas, about the impact on rural isolation,” he said during a visit to Cork.

“That’s why, even before the Bill was passed, we put more money into rural transport in particular and I think that’s an important measure and I hope that’s recognised too. I do regret that a small number of TDs held up this legislation.

“I appreciate that they object to it but by holding up this legislation they’ve also held up other important legislation and that’s not really the way to run a parliament, I don’t think.”