Dr Noël Browne: ‘The furthest thing from a career politician’ 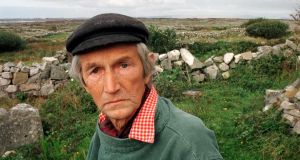 Browne at his home in Connemara. Photograph: Joe O’Shaughnessy. 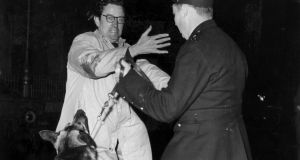 A police dog leaps to attack Dr Noël Browne TD during demonstrations outside the American Embassy in Dublin, in 1962. Photograph: Gordon Standing 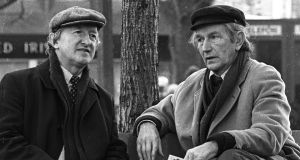 Thirty years ago, the autobiography of a complex and controversial Irish politician was published – to acclaim in some quarters and horror in others.

Dr Noël Browne’s Against the Tide, published by Gill & Macmillan, is the personal and political story of a former minister for health who will be forever linked with the ill-fated Mother and Child scheme, which caused the collapse of the 1948-51 interparty government.

The late politician is also associated with the eradication of tuberculosis, which claimed the lives of thousands of Irish people in the early decades of the new State.

Browne’s book chronicles his family’s misery, humiliation and battle with TB in an impoverished Ireland, emigration to Britain, and his own remarkable stroke of luck in becoming a doctor because of the generosity of a wealthy Dublin family.

It contains his version of events of the Cabinet rows on the Mother and Child scheme and, most controversially, features what are in some cases devastating portraits of fellow Cabinet ministers.

Some saw his references to former colleagues as personal bitterness and a cheap shot at politicians who were dead and could not defend themselves.

Others thought them fair game, believing Browne had been the victim of a largely spineless Cabinet in the face of the power of the Catholic Church and the medical profession at the time.

Browne was a close friend of President Michael D Higgins and they made an RTÉ television documentary together in the 1990s.

Other friendships ended in bitterness, sometimes abruptly terminated by Browne. His detractors thought him self-centred, sometimes unwilling to listen to others, capable of distorting facts to suit his own argument, unable to come to terms with the family tragedies of his early years.

Browne grew up in Waterford, Derry, Athlone and Ballinrobe, one of eight children. His father, who worked as an inspector with the National Society for the Prevention of Cruelty to Children, contracted TB and died when Noël was nine.

A few years later, the family moved to England to stay with the eldest child when their mother knew she was dying from TB. She died in a workhouse two weeks after arriving in England. The disease claimed the lives of other family members and Browne himself contracted TB, recovered and later relapsed. He again recovered but intermittently battled the disease throughout his life.

He won a scholarship to a preparatory school in Eastbourne in 1929, later moving to the Jesuit Beaumont College, Windsor, where he met Neville Chance, the son of a wealthy Catholic Dublin medical family.

In a dramatic turnabout in his personal fortunes, the Chance family offered to pay his fees through medical school in Trinity College Dublin.

After graduating he worked in Britain and Ireland, in the area of the illness which had devastated his family. He was persuaded by his friend Noel Hartnett that political action could hasten the eradication of the deadly scourge and he joined Clann na Poblachta, the new radical republican party led by Seán MacBride.

He was appointed minister for health on his first day in the Dáil as a TD for Dublin South East in 1948 in an interparty government led by Fine Gael taoiseach John A Costello. It was a time when the Catholic Church was the dominant force in the Republic and, incomprehensible as it might be today, politicians lived in fear of a “belt of the crozier’’.

Browne recalls in his book visiting one of his episcopal opponents, Bishop Michael Browne of Galway, as the Mother and Child controversy raged.

Browne writes that the bishop handed Browne a silver casket “in which lay his impeccable hand-made cigarettes’’ made in Bond Street. He then offered the young minister a glass of champagne, remarking he liked champagne in the afternoon.

“He appeared ignorant of the social solecism of mixing cigarettes and champagne,’’ Browne adds.

“My feeling of awe was mixed with a sense of astonishment that this worldly sybarite considered himself to be a follower of the humble Nazarene.’’

At the time of the Mother and Child controversy, an Irish Times editorial observed the Catholic Church “would seem to be the effective government of the country’’. Costello responded: “I, as a good Catholic, obey my Church authorities and will continue to do so in spite of The Irish Times or anything else.’’

The scheme’s history dated from 1946 when the then Fianna Fáil minister for health, Dr Jim Ryan, prepared legislation which, among other measures, proposed providing free medical care for mothers and children to the age of 16 without a means test. There was immediate opposition from the medical profession, given it would reduce the number of private patients.

The Catholic hierarchy was also opposed, arguing it was entirely contrary to “Catholic social teaching . . . and the rights of the medical profession’’.

In 1950, Browne decided to reactivate the Bill and met with strong resistance from the bishops and the doctors. Isolated in cabinet, he resigned in April 1951, after being asked by MacBride to do so. The controversy fractured the government, although it eventually fell on the price of milk.

When Fianna Fáil returned to power, Ryan, again minister for health, managed to get the Bill passed with a modest means test and other minor concessions.

Browne’s success in eradicating TB was helped by funding from the Irish Hospital Sweepstakes and the arrival of new drugs and vaccines. A publicity campaign, and the building of hospitals and sanatoria, helped remove the awful threat of illness and death from many people.

Browne work on the issue helped him get elected to the Dáil and Seanad as an Independent and member of different parties, including Fianna Fáil and Labour, in a mercurial career that ended when he retired from politics in 1982.

He died aged 81 years in 1997 in Connemara, where he had gone to live. Those at his funeral remarked how few politicians were there.

Browne’s closest ally over the years was his wife, Phyllis Harrison. They married in January 1944 and had two daughters. She died in 2006.

John Horgan, in his biography Noël Browne: Passionate Outsider, published in 2000, writes that Browne’s autobiography was a publishing sensation when it appeared in November 1986.

An initial print run of 3,000 copies was extended and it eventually sold more than 80,000 copies. Fourteen years after it was published, and still in print, it was selling approximately 1,000 copies a year.

Horgan summed up its appeal: “Two elements of Against the Tide, in particular, caught the public’s imagination... One was the vividness of his childhood recollections, happy and unhappy’’. The other was Browne’s “pitiless evocation’’ of political opponents. “Even in a country which mines, on occasions, some rich veins of political hatred, it quite took the breath away,” Horgan recalled.

Horgan notes only two, Paddy McGilligan, the Fine Gael minister for finance, and TJ Murphy, the Labour minister for local government, emerge with any credit at all.

Among those to suffer the Browne treatment was his former cabinet colleague William Norton, Labour leader, tánaiste and minister for social welfare: “Norton was a man of many talents, all dedicated exclusively to his own betterment in society.”

And here’s Browne on Dick Mulcahy, Fine Gael’s minister for education: “He had an unlimited capacity to verbalise, as distinct from articulate, his needs. He spoke through the voluminous, resonating sound chamber made by his parrot’s beak-shaped nose.”

Jim Everett, Labour minister for posts and telegraphs, was “a nondescript, undersized man, of swarthy complexion, with watchful ferret’s brown eyes”, while James Dillon, the Independent minister for agriculture who later rejoined Fine Gael, had been “expensively educated” but “a shallow person, with an unoriginal and uncreative mind”.

Thirty years after his book was published, Browne continues to stand out as a rarity within Irish politics: a man of ideals and sometimes brutal honesty for whom fighting against social injustice was deeply personal; the furthest thing, in other words, from a career politician.