Irish party politics can be quite divided at times, but it seems to have been united on one issue over the past year. Video: Oireachtas 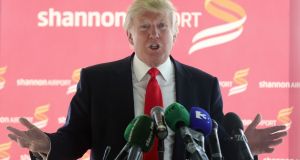 Donald Trump was expected to visit his golf club in Doonbeg, Co Clare, earlier this year but it was cancelled. At the time, Mr Kenny said he had no plans to meet Mr Trump. Photograph: PA

The leaders of both Fine Gael and Fianna Fáil criticised Mr Trump on the floor of the Dáil earlier this year.

The pair made the comments in a Dáil exchange last May and Mr Kenny accused Mr Trump of using “racist and dangerous” language.

Pressed by Mr Martin in the Dáil during Taoiseach’s question time for his reaction to Mr Trump’s comments about immigration and the Middle East, Mr Kenny said: “If Trump’s comments are racist and dangerous, which they are, there is an alternative to vote for.”

Mr Martin had asked him to stand up for some basic principles. “What has been articulated in the US election is worrying,” Mr Martin said.

“It is not acceptable for democrats to speak in the way Donald Trump has about various religions and ethnic groups and about building walls. It sets an appalling example for how the free world should speak and articulate.”

Just last month, Minister for Social Protection Leo Varadkar accused Mr Martin of using “invective more typical of [DONALD]Trump”. Mr Varadkar also previously accused Mr Trump of making “sexist” and “misogynistic” remarks. “I think any reasonable person would agree some of the comments he’s made are racist, particularly in relation to latinos and also many of the things he has said are sexist,” he said.

Mr Trump was also expected to visit his golf club in Doonbeg, Co Clare, earlier this year but it was cancelled. At the time, Mr Kenny said he had no plans to meet Mr Trump, while Mr Varadkar said he would repeat his criticisms to Mr Trump’s face.

Mr Varadkar did say, however, that Irish politicians would have to meet Mr Trump if he was elected.

“If somebody is the elected leader of another country, it is the norm that politicians would meet them. There are lots of elected and non-elected leaders from all over the world that have done much worse than Donald Trump has ever said, and we do meet them, because we have to. That’s the way we make sure we protect the interests of our citizens.”

Minister for Jobs Mary Mitchell O’Connor last month said that Mr Trump “disgusts” her, but added: “I think that it is totally unacceptable the way he talks about women. And what really disgusted me was the way he spoke about people with disability. It is reprehensible.

“But if I had to work with him, if he is the president of the US, I will absolutely work with him and I will have a working relationship.”

Minister for Foreign Affairs Charlie Flanagan had to warn his colleagues in the Fine Gael parliamentary party to refrain from making disparaging remarks about Mr Trump.

“In the privacy of the Fine Gael parliamentary party meeting, I advised colleagues to be measured and non-partisan in their comments about the US election, with particular reference to Trump,” he said.