Does Votegate controversy signal a slipping of standards in the Dáil?

The Irish Times asked 15 Dáil deputies for their views 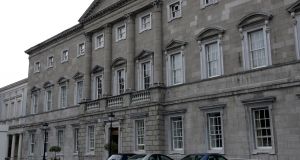 Pat The Cope Gallagher: ‘I do believe the changes made by the Ceann Comhairle to make sure members take their seats will be able to deal with this issue fully and adequately’. Photograph: Eric Luke

At lunchtime one Thursday, a Fianna Fáil TD made his way to the Dáil chamber for a series of votes on Bills and motions that had come before the Dáil that week, on which the House divided.

“There was a rake of them, six or seven votes at least. There was a vote on local drug task forces, on the national children’s hospital and a few other things. But each of the motions had a few amendments.

“On NCH I was okay but when you have amendments it can be totally confusing.” He said that was especially true of the more niche motions. The TD pointed out the votes took place in isolation from the debate, which occurred earlier that week.

“Sometimes with the best will in the world you end up totally bamboozled. You go up and do what the whip tells you to do, press the button whatever way you are told.

“To be honest it’s a bit like that programme Deal or No Deal [a game show hosted by Noel Edmonds on Channel 4] where you open a box having no idea what’s inside.”

Since 2011, Dáil Éireann has been practising what it describes as “new politics”. This has manifested itself in two ways. The first is a noticeably less formal approach to parliamentary business. The second revolves around new practices and procedures.

Some of those changes, such as dress code, have evolved, others have happened because of the arithmetic of the 32nd Dáil. With no party or combination within 25 votes of an overall majority in 2016, compromises and deals had to be struck which changed the way the Dáil does its business.

There is an automatic assumption that most of that change was bad and has led to a dipping in standards. For sure, examples that support that view can be found.

But that has to be measured against changes most parliamentarians would see as hugely progressive. Special committees have come together to find solutions for dealing with controversial issues, such as abortion, same sex marriage, the health services (Sláintecare); and climate change. These have produced seminal changes that would not have been possible under the old system.

That said, the paralysis of numbers in the Dáil has a downside. And that has manifested itself in a view among some TDs (partly cynical, partly justified) that what happens in the chamber is irrelevant or redundant. And some point to that sentiment, or malaise, as leading to a cavalier and casual attitude to voting in the parliament of the land, as uncovered last week.

In the so-called Votegate controversy it was revealed that several TDs across parties had voted on behalf of their colleagues when they were away from their seat, but still present in the Dáil, while Niall Collins voted a number of times for Timmy Dooley when he was absent from the chamber. Last week’s review conducted by Dáil Clerk Peter Finnegan concluded it was not “legally appropriate” to recommend sanctions the two TDs because another inquiry had started. Ceann Comhairle Seán Ó Fearghaíl said its findings had further eroded public confidence in the working of the Dáil.

The Irish Times asked some 15 Dáil deputies about their views on standards in the Dáil, and whether they thought they were slipping. All agreed voting for an absent colleague was wrong. But there were mixed views on whether it pointed to a general dip in standards. Most regarded the casual attitude to voting as a relatively isolated trend.

Many think the laissez-faire attitude to voting dates back to 2016. However, John Lahart, of Fianna Fáil – who is a teller and au fait with all legislation that passes through – says that the practice of getting other people to vote for you while you’re in the chamber predated his own election as a TD three years ago.

There have been more than 300 private members’ Bills since 2016, which many TDs say is unmanageable. Because there is no dominant vote block in the Dáil, half of the Bills have got through to second stage. But for the overwhelming majority of those, the progress has then stalled. They have either been bogged down at committee or the Government has said they required a money message – essentially blocked because they will come at a cost to the State.

The upshot is only 10 (that’s a little over 3 per cent) have been enacted and become law. “It’s democratic sabotage,” says Richard Boyd-Barrett of People Before Profit. His group is bringing forward a motion that would prohibit such money messages for Bills where cost is an incidental issue.

With such inertia, argue TDs from all sides, votes in the House to advance such Bills begin to lose relevance.

“You learn quickly that most of the time your vote does not make any difference,” said one TD.

But none believes that this systemic issue justifies the bad practices highlighted this week.

“I belong to a (small Independent) group who take our voting very seriously,” said Galway West Deputy Catherine Connolly. “A small number of people have done wrong and that is clear. There are no excuses.”

But Connolly does not accept it points to a wider malaise. “The system of voting is very good. I would say every one has made a mistake but you need to correct your mistake. The system is as good as the politicians using it.

“When something like this happens, there is a dangerous narrative that we are all at it. The truth is the vast majority are not.”

The vastly experienced Donegal TD Pat The Cope Gallagher is also Leas Ceann Comhairle. When he sits in the chair he instructs members to take their designated seats.

“Yes they have ignored it. But now that it has come up, I do believe the changes made by the Ceann Comhairle to make sure members take their seats will be able to deal with this issue fully and adequately,” he says.

For others, it is an illustration of a Dáil without a decisive majority being an indecisive Dáil on standards. The Independent TD for Clare Michael Harty thinks it’s an illustration of a laxity, which surprised him when he first became a TD. He sees people talking during votes, or taking phone calls, as a sign of people not taking their duties seriously. Like several others, he was critical of Fianna Fáíl’s Lisa Chambers for what he saw as a casual attitude towards casting a vote.

“It was extraordinary for it to be not sufficiently important for her to correct the error she made,” he said. She voted at the seat of Dara Calleary when he was absent from the Dáil, then voted in her own seat, when she says she realised her mistake.

A colleague sitting on the press gallery during Leaders’ Questions counted 26 TDs surfing their phones during the debate. Most TDs, have no issue with that. “Members will take their phones or iPads into the chamber,” says Pat The Cope Gallagher. “If they have an urgent calls or text, the member can respond. Under no circumstances, they should not take a call. In fairness it does not happen that often.”

Seán Barrett of Fine Gael, a former Ceann Comhairle, believes the Dáil has become too casual.

“I get the impression that respect is fading a bit.

We all need to be reminded we are going through the doors into the parliament of the State.

“Maybe I am a little too conservative and old-fashioned. Maybe it’s to do with my age, but it is important to recognise where you are.”

Some of that has to do with dress. The late Tony Gregory set the pattern when he refused to wear a tie. Some of the new Independent TDs who came in in 2011 such as Mick Wallace and Luke Flanagan, preferred T-shirts to shirts. While some would prefer a slightly more formal dress code, fewer TDs of all parties wear ties these days.

The language is a bit less formal too now. But “F” bombs (the use of the F-word) still remain relatively rare. Joan Collins was responsible for one recently – Paul Gogarty will always be associated with the most notorious one.

“Members have to have respect for themselves and others,” says Pat the Cope. “They still do,” he says, despite the controversy over voting this week.