Divisions over health funding have delayed response to Sláintecare report 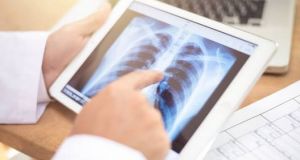 The Sláintecare report recommends reforms throughout the health service, including the complete separation of the public and private systems of healthcare. Photograph: Getty Images

Divisions over the future of health funding in Government have delayed the Government’s response to the all-party Sláintecare report again and the long-awaited “implementation plan” is now not expected to be presented to the Cabinet until next week at the earliest.

The Sláintecare report, produced by an all-party committee and published a year ago, has been hailed by its supporters as a blueprint for the future of the health service. It recommends a series of reforms throughout the health service, including the complete separation of the public and private systems of healthcare which currently overlap in many instances.

However, there is scepticism in Government about some of its recommendations, and nervousness in the Departments of Finance and Public Expenditure about the potential escalation of costs under the plan.

Last week in the Dáil, in response to questions about the implementation plan which had been promised by the Government for months, Taoiseach Leo Varadkar said while the Sláintecare report contained much that he agreed with, it also “falls down in a lot of areas”.

“When one reads the sections on recruitment and retention, using public money efficiently and making sure the money actually gets to the patient, there is not an awful lot in it, which is why we needed to do so much work to bring it to implementation plan standard,” Mr Varadkar said.

The Irish Times understands there is agreement in Government to make an appointment imminently as chief executive of the Sláintecare Implementation Office and for an “advisory council” to oversee its work. However, there is continuing reluctance to commit extra resources to health to implement the plan.

The report itself suggested that extra spending be committed to health on an annual basis, and also that a €3 billion fund to cover the costs of transition from a public-private system to a public-only system should be set aside. Senior Government sources say there is little chance of this happening.

Department of Finance sources point to an emerging €200 million overspend in the HSE’s budget for the first six months of the year. And next year’s health budget will have to make provision for the cost of the recent settlement with hospital consultants for an unauthorised pay cut in 2008, which will cost €200 million and see the pay bill for consultants rise by €60 million a year.

Half-year exchequer figures to be published on Tuesday are expected to point to the emerging health overspend.