Department of Justice had ‘shared culture of secrecy with Garda’, report finds 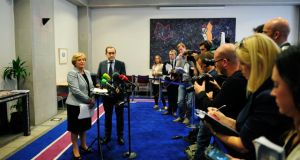 Frances Fitzgerald addresses the media yesterday after publication of the damning report on the Department of Justice. Photograph: Aidan Cawley/The Irish Times

The Department of Justice has a “closed, secretive” culture as well as “significant leadership and management problems”, according to an independent report.

A “shared culture of secrecy” with An Garda Síochána and the confidential nature of the relationship with the force also influences the department’s attitudes, it is claimed.

The report, commissioned by Minister for Justice Frances Fitzgerald following another report by Seán Guerin SC into claims of Garda malpractice made by Sgt Maurice McCabe, was scathing in its criticism of the department.

It found “significant leadership and management problems” as well as “ineffective management processes and structures to provide strong strategic oversight of the key agencies both to hold them accountable and to ensure their effectiveness is maximised”.

The culture of the organisation is “closed” and secretive and the department is in need of a “programme for fundamental and sustained organisational and cultural change and renewal”.

It also called for a “change in leadership and management routines, systems and practices to underpin both the performance of the department and key agencies”.

While it said there was “considerable strengths and expertise in the department”, the report identified “a number of key issues and significant weaknesses that need to be addressed”. It made numerous recommendations, which it said should be introduced over different time periods, such as within three months or a year.

“The Review Group found the culture of the department to be closed and unnecessarily secretive (even taking into account the important and confidential nature of some of the work),” it said.

“This has resulted in an inward-looking organisation with limited learning capacity and reduced openness to new ideas.” It said the culture “has not changed or adapted to the world in which it now operates”.

The report also highlighted the relationship between the department and An Garda Síochána, and said the “culture of confidentiality” in dealings between the two organisations “has influenced the leadership style, management practices and relationships with other agencies”.

Management oversight was also found to be weak, leading to “a lack of clear responsibility and accountability, both within the department and when dealing with external agencies and stakeholders”.

An intensive focus by Ministers on legislative reform meant that the other, critical priorities and a widening remit were neglected, said the report.

The best international comparator for this system is Australia, it said, and added a deputy secretary general should be appointed to take the lead on the home affairs portfolio.

The management of the relationship with An Garda Síochána also needs to be examined, according to the report.

It says there is “ineffective . . . oversight of and confused, passive and disaggregated departmental relationships with An Garda Síochána”.