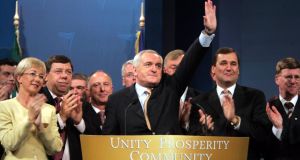 Fianna Fail raised $116,500 when Bertie Ahern was leader and taoiseach but the party’s US fundraising efforts petered out thereafter. Photograph: Cyril Byrne

Declared donations collected in the US by Fianna Fáil over the past three decades amount to a tenth of what Sinn Féin raised from donors in the US during Friends of Sinn Féin’s 20-year history.

US department of justice filings for Friends of Fianna Fáil show the party raised more than $1.28 million over a period of almost 20 years, running from 1984 to 2003 when its drive for US donations ended.

This compares with $12 million raised by Friends of Sinn Féin between its first filing in February 1995 and the end of October last year.

The biggest sums raised by the party were when Fianna Fáil was in power and the pulling power of taoisigh Charlie Haughey, Albert Reynolds and Bertie Ahern could guarantee that they would attract enough people to sell tables at New York’s Waldorf-Astoria or Pierre Hotels.

The biggest sum raised by the party in any one six-month reporting period was in the second half of 1996 when Friends of Fianna Fáil raised a total of $238,650 from the party’s 70th anniversary dinner in the Pierre Hotel, according to the US department of justice filings. The event cost $57,750 to host.

Fianna Fáil consistently raised funds throughout the late 1980s when Haughey was taoiseach, most notably on two occasions, in 1988 and 1990 when the party’s US wing raised $140,754 and $138,771 respectively during six-month reporting periods as a result of fundraising dinners in the Waldorf-Astoria. A further $71,905 was raised in 1993 and $111,100 in 1994, from functions in the same hotel where then taoiseach Albert Reynolds was guest speaker.

Among the donors Fianna Fáil shared with Sinn Féin were Structure Tone, which figures in the Friends of Fianna Fáil filings over the years, as well as its founder Pat Donaghy.

Another individual who donated to both parties was American television executive Kevin P O’Sullivan who died in 2006, aged 77.

The signatories on the filing to the US department of justice for the period ending May 31st, 1996, were then treasurer of Friends of Fine Gael Jim Miley, who is now business-to-consumer director of The Irish Times, Seán Murray and Mark FitzGerald, a former national director of elections for Fine Gael and current chairman and chief executive of the Sherry FitzGerald Group.

In other filings by the organisation, only interest earned on bank deposits are listed which, although not classified as donations, must be declared under the US Foreign Agents Registration Act.

Another group, Supporters of Fine Gael, set up in 2007, raised $28,350 from almost 150 guests at a function in the Manhattan Club near Times Square, in June 2008. It has not raised any money since.