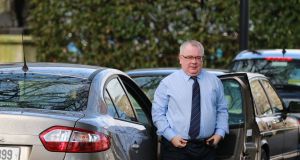 The decision to fly the Tricolour above Leinster House at half-mast as a mark of respect for the late Martin McGuinness was made by Ceann Comhairle Seán Ó Fearghaíl.

However, there was no discussion in Northern Ireland about whether the Union Jack should fly at half-mast on public buildings, since under agreed rules it will not be next flown until late April.

In accordance with standard protocol in the Republic, the Leinster House flag is lowered to half-mast when a former head of state or a TD or Senator dies. However, the Ceann Comhairle, as chairman of the Dáil Committee on Procedures and Privileges, has significant discretion to make decisions of his own volition.

In the past, when deaths have occurred which are considered of national significance, the ceann comhairle of the day has ordered the flag to be lowered. This happened when six Irish students died when a balcony collapsed in Berkeley, California in 2015, and when 10 people died in a fire at a halting site in Carrickmines, Co Dublin, in the same year.

A spokeswoman for the Oireachtas said Sinn Féin had made a request for the flag to be lowered this week, but Mr Ó Fearghaíl had already decided this should be done.

The flag was not lowered when the former Northern Ireland first minister Ian Paisley died in 2014. Such a gesture was not considered appropriate at the time, given that Dr Paisley had a minimal relationship with the State.

There were no dissenting views expressed by any TD or Senator to the decision to lower the flag.

The matter of whether the British union flag should fly at half-mast in Northern Ireland was not an issue because there are no designated days for flying the flag in the coming period. The union flag is flown on between 17 and 20 designated days each years in the North. The last designated day was St Patrick’s Day and the next one is Queen Elizabeth’s birthday on April 21st.

In any event, Sinn Féin would have no interest in the union flag flying at half-mast . It has a policy of calling for “parity of esteem” for both the Tricolour and the union flag and for them to fly side by side.

The Tricolour, however, is being flown at half-mast outside Sinn Féin offices in both Northern Ireland and the Republic as a mark of respect.

It is understood no discussions with Sinn Féin were held by the offices of the President Michael D Higgins, Taoiseach Enda Kenny or Fianna Fáil leader Micheál Martin ahead of their attendance at the funeral in Derry.

Officials do not expect there will be any paramilitary trappings, such as black berets and gloves, although the coffin is expected to be draped in the Tricolour.

The funeral Mass is due to take place at St Columba’s Long Tower church at 2pm on Thursday. It is expected to attract thousands of mourners.