Dara Murphy ‘has not been working as a TD’, Fianna Fáil claims 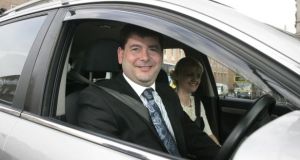 Dara Murphy has been working for most of the last two years in Brussels as the campaign director for the European People’s Party (EPP). Photograph: Dara Mac Dónaill

An in-depth analysis of Mr Murphy’s record over two years showed he had the lowest number of attendance days in the Dáil.

He has been working for most of the last two years in Brussels as the campaign director for the European People’s Party (EPP), the group with which Fine Gael is aligned in the EU.

However, in addition to his salary of €94,000 he has still claimed his full parliamentary standard allowance of 51,600.

For a Cork-based TD, some €31,365 of that sum is comprised of travel and accommodation allowance (TAA). To avail of the TAA, a TD must clock-in in the Leinster House campus, using the electric fobbing system, on at least 120 days in a year.

Mr Murphy has fobbed in on a very high number of non-sitting days, including 12 days during August. Over 100 of his 120 attendance days were Mondays, Thursdays and Fridays. Tuesday and Wednesday are the days during which most business takes place in Leinster House.

He has maintained an office in Cork and has said in the past he continues with constituency work.

Fianna Fáil public expenditure spokesman Barry Cowen said on Friday there was no evidence Mr Murphy was fulfilling his duties as a TD and as a parliamentarian. He said the Taoiseach had been disingenuous in saying he had been very busy and doing extremely well.

“Leo Varadkar has said his main job has been a European job. It’s not a parliamentary job. It’s a party job, for the EPP, Fine Gael’s political grouping. It’s not a defence to say he is around for key votes. He has not been working as a TD and for the Taoiseach to claim that he is is, is completely misleading.”

On Thursday, questioned about Mr Murphy’s non-participation in the Dáil, the Taoiseach said: “He’s been very busy over the past two years. Not just as a TD representing his constituency locally, he has been present for key votes. But his main job has been a European job in the past two years, and he’s done that extremely well.”

By comparing the log of Mr Murphy’s attendance in Leinster House with the datelines on his Twitter feed, there have been at least 10 days in the past two years where he has logged in before departing for, or after arriving from, another EU State. It shows that on five of those dates, he has been also in Brussels that day. The other locations have been Warsaw, Poland; Malta; Sofia, Bulgaria, Prague, the Czech Republic and Paris.

Mr Murphy has not spoken in the Dáil since December 7th, 2017. He spoke at a meeting of the Public Petitions Committee in October 2018. It was his only attendance at the committee, of which he is a member, during 2018 and 2019.

He has asked five parliamentary questions in 2019 and two in 2018, according to the Oireachtas website.