Council will pay more than €156,000 for design and planning costs incurred so far 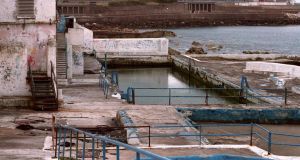 A plan to develop a €2.5 million urban beach in Dún Laoghaire, Co Dublin, has been appealed to An Bord Pleanála, local councillors have been told.

Ahead of their monthly meeting, councillors in Dún Laoghaire-Rathdown County Council were told an appeal against the “Badeschiff” (bathing ship) project, approved at the end of November by the council’s planning department, had been lodged with the planning board at the end of December.

The project, at the East Pier in Dún Laoghaire Harbour, includes an artificial beach and cafe as well as a floating swimming pool with heated, treated seawater built on a converted river barge beside a berth.

It was inspired by an urban beach in Berlin and is to be jointly funded by the council and Dún Laoghaire Harbour Company.

The council had already received invoices of more than €156,000 from the harbour company “for 50 per cent of the costs incurred and discharged”, which would be paid in the coming weeks, Mr Shakespeare added.

His report did not include details of who had made the appeal. When the application was before the council’s planning department, 21 submissions were received, with 15 objections, including from local community groups and individuals.

Concerns included that the East Pier, a protected structure, would be damaged by the development. Community groups said the money should be used to redevelop the nearby derelict Dún Laoghaire baths.

The project is also listed as part of the council’s “contractually committed projects 2015- 2017” in its capital programme.

The capital programme, to be considered by councillors this evening, includes more than €34 million for committed projects and more than €59 million for projects not contractually committed.

Sums for projects not yet contractually committed include €2.5 million for the refurbishment of Dún Laoghaire baths.