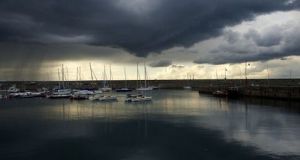 Dún Laoghaire Harbour (above): At a council meeting on Monday night, councillors unanimously agreed “serious risks for the local authority” had been raised in a due diligence report commissioned by the council into the position of Dún Laoghaire Harbour Company. File photograph: Getty Images

Dún Laoghaire-Rathdown county councillors from all the main parties have expressed concern at potential financial liabilities involved in taking over responsibility for Dún Laoghaire Harbour.

At a council meeting on Monday night, councillors unanimously agreed “serious risks for the local authority” had been raised in a due diligence report commissioned by the council into the position of Dún Laoghaire Harbour Company.

Under the provisions of the Harbours Act 2015, responsibility for the harbour is due to be transferred from the Department of Transport to the local authority.

However, Fianna Fail councillor Mary Hanafin said the due diligence report had identified “an urgent need for a risk assessment” in almost every area of the harbour company’s operations.

She said issues were raised about pension liabilities, legal costs, ownership of assets and liability for the repayment of grants which had been paid to the harbour company.

She told the meeting the grants could be as high as €112 million, and “the liabilities for clawback are absolutely potentially enormous”.

Fellow Fianna Fáil councillor Shay Brennan said taking over the harbour company could see its debts transferred to “every household between Dún Laoghaire and Dundrum”.

Fine Gael councillor John Bailey said the council wanted democratic control over the harbour, but not the liabilities of the harbour company - the scale of which he said was unknown.

He called for certified, audited accounts from the harbour company. “There is no way we are taking on this liability, I want the harbour but this is an absolute joke,” he said.

Cllr Barry Ward of Fine Gael called for the dissolution of the harbour company before responsibility for the harbour is transferred to the council.

He said the council did not want a subsidiary company, because this would prevent “any oversight and governance” by the elected members.

People Before Profit councillor Melisa Halpin also expressed concern over the due diligence report, saying councillors had been waiting 20 months to find out what the issues were.

She said there were “major questions” which remained to be asked in a risk assessment.

Labour councillor Deirdre Kingston said she was “very much in favour of the harbour company being dissolved” while cathaoirleach Cormac Devlin said he was concerned the council “may just be advised” by the Minister for Transport that the harbour and all its liabilities had been transferred.

Council chief executive Philomena Poole said the difficulty for the council was that the legislation transferring the harbour may result in all assets and liabilities transferring, whether or not the harbour company is dissolved. “Regardless of the model the buck stops here,” she said.

She agreed with the councillors that the council was not “in a position to bring a substantial liability to the local authority”.

She said such a move would involve major and dramatic reforms of the budgetary position and the council’s liabilities.

She undertook to contact the Departments of Transport and Housing and Planning to advise them of the council’s “need for more co-operation” in the transfer of the harbour.