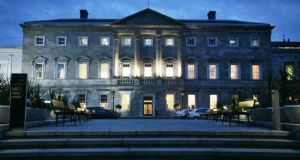 By Tuesday afternoon, Fianna Fáil noted ‘clear instances’ where Ministers were absent from their seats over the past 12 months. File photograph: The Irish Times

Tensions between Fine Gael and Fianna Fáil have escalated significantly because of the Dáil voting controversy, leading to tit-for-tat charges that are seen as the prelude to a general election campaign.

Fine Gael accused Fianna Fáil of trying to muddy the waters by highlighting video footage where Fine Gael Ministers were not in their seats for Dáil votes. In response, Fianna Fáil accused Fine Gael of arrogance.

Rather than respond to complaints levelled against Fianna Fáil’s Lisa Chambers and others, “Fianna Fáil continue to try and muddy the waters and distract from the failure to answer the questions”, said an FG spokesman.

Fianna Fáil retorted, saying: “The idea that valid questions about the whereabouts of various Government Ministers during important votes can just be dismissed without investigation says much about the arrogance of Fine Gael.”

Privately, Fianna Fáil believes Fine Gael figures were behind the revelation that Fianna Fáil TD Niall Collins had voted on behalf of his colleague Timmy Dooley six times, when the latter was absent from the Dáil.

In addition, they blamed Fine Gael for disclosing that Ms Chambers had voted on behalf of her Mayo constituency colleague, Dara Calleary, when he was not in his designated seat.

Late on Monday Fianna Fáil began highlighting segments from videos of Dáil votes which showed that Fine Gael Ministers were not visible in their seats while votes were being taken.

In one, Fine Gael Minister of State Paul Kehoe was not in his seat for five successive votes although video footage revealed a glimpse of him at the back of the chamber.

By Tuesday afternoon, Fianna Fáil noted “clear instances” where Ministers were absent from their seats over the past 12 months, including Michael Ring Regina Doherty, Damien English and Jim Daly.

However the Fine Gael Ministers insist they were in the chamber, though not in their seats and had asked others to press their voting button. This practice is widespread and cannot be compared to the Collins-Dooley case, the party said.