Dáil vote on abortion Bill carried by 138 to 24 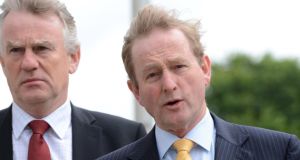 The effort to win over doubters in Fine Gael is seen as a big test of Enda Kenny’s authority as party leader. Photograph: The Irish Times

Four Fine Gael TDs and a Sinn Fein TD have defied their party whip to vote against the second stage of the Protection of Life During Pregnancy Bill.

The Government won the vote by 138 votes to 24. Fine Gael TDs Terence Flanagan, Peter Mathews, Billy Timmins and Brian Walsh voted against the Bill, as did Sinn Fein’s Peadar Toibin.

The Bill allows for abortion in Ireland in limited circumstances, including a risk to the life of the mother due to suicide.

Minister of State Lucinda voted for the second stage of the Bill. She indicated in her Dail speech yesterday that she hoped there would be substantive amendments to the legislation at committee stage, which begins this evening.

A number of Fianna Fail TDs voted against the legislation along with several independent TDs including Michael Healy Rae, Mattie McGrath, Michael Lowry and Noel Grealish.

The Bill is to go for a second reading before a Dáil subcommitte on health this evening.

Taoiseach Enda Kenny had faced the defection of several Fine Gael TDs with at least five of the party’s TDs expressing reservations about the Bill. Four members of the party had confirmed they would vote against it.

While there is no threat to the Government’s parliamentary majority, the effort over weeks to win over the doubters in Fine Gael is seen as a big test of Mr Kenny’s authority as party leader.

Minister for Children Frances Fitzgerald said Fine Gael members who voted against the Bill would lose the party whip.

The Taoiseach had “nailed his colours to the mast” on the issue and considered the Bill a very important piece of legislation, she told RTE radio this morning.

Under Fine Gael rules, TDs who lose the party whip must apply to a Fine Gael branch to run for election again for the party and this is subject to the approval of its national executive.

Only one TD - Denis Naughten of Roscommon - has defied the Fine Gael whip since Mr Kenny took power more than two years ago.

In addition, Minister of State Lucinda Creighton and four other Fine Gael TDs - John Paul Phelan, Michelle Mulherin, John O’Mahony and James Bannon - all criticised the Bill during the opening Dáil debate on it yesterday. They did not say how they would vote, however.

The vote was scheduled for 5pm after Mr Kenny’s return from Strasbourg, where he addressed the European Parliament on Ireland’s EU presidency.

Mr Kenny issued a stern defence of the legislation in his own speech to the Dáil, saying it was not possible to remove the suicide clause. He also rejected demands for a time limit to be applied to when a termination can take place.

“To those who fear that this Bill is the first step towards a liberal abortion regime in Ireland, I say clearly that this extremely restrictive Bill is the only proposal that will be brought forward by this Government on this issue,” he said.

The Bill provides a legal framework for abortion in cases where there is a threat to life to the pregnant woman, including by suicide.

The Taoiseach’s remarks came only hours after Ms Creighton took issue with the suicide clause and the lack of term limits. The expectation in political circles is that she will vote for the legislation today to see whether the Government accepts substantive amendments in the next phase of the Dáil debate.

However, this is considered unlikely and it is expected she will vote against the Bill at the committee stage later this week. This would cost her both her membership of the Fine Gael parliamentary party and her Ministerial office.

Mr Phelan, TD for Carlow-Kilkenny, said it would be reasonable to expect a referendum on the subject.