Dáil tone: TDs to be banned from making calls in the chamber

Decision by Ceann Comhairle follows complaints from members of the public 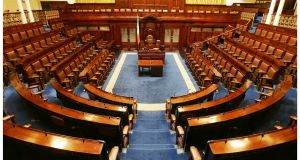 The Ceann Comhairle said a minority of members regularly make and receive calls in the chamber while the Dáil is in session. Photograph: Alan Betson

TDs are to be banned from taking and making phone calls in the Dáil chamber following an intervention by the Ceann Comhairle.

The Dáil’s committee on procedures, which governs standards in the parliament, has agreed to amend standing orders to prevent deputies using their phones in the chamber.

The decision follows a number of complaints from members of the public to Ceann Comhairle Seán Ó Fearghaíl.

Mr Ó Fearghaíl had requested the legal advisers to the committee examine blocking all mobile phone signal to the chamber.

There was also discussion on whether an alert could be sent to members to switch off their phones upon entering the Dáil.

The committee was advised on the legalities of such a move and on the potential consequences of blocking TDs from using their phones.

The Ceann Comhairle told the committee there are a minority of members who regularly make and receive calls while seated in the chamber, while the Dáil is in session.

It was agreed to amend the rules of decorum in the House to explicitly prohibit the making and taking of calls in the chamber while the Dáil is in session.

There will be provision, however, for calls to be made and taken in the division lobbies when members are voting.

There will be no ban on sending text messages or using social media from the chamber although members of the media are prevented from doing so.

The issue was initially raised by the Ceann Comhairle in January when he stated TDs were “so addicted to their mobile phones that they cannot leave them outside”.

In one letter to Mr Ó Fearghaíl and the committee in June, a member of the public alleged deputies were showing “bad manners and contempt to the public” by using their phones.

The person, who wrote the correspondence on the day Leo Varadkar was elected Taoiseach, added: “I saw the contempt shown by Government TDs and Ministers against their new leader elect and the bad manners shown to the public viewers.”

The committee had also agreed previously to amend standing orders to prevent TDs from wearing clothing carrying political slogans in the chamber.

Members will now be prohibited from “the wearing of garments or the overt display of any item containing a slogan or a campaigning message, graphic or image of any kind or the wearing or display of anything of a commercial or promotional nature”.

Both amendments to standing orders will be voted on when the House resumes in September.