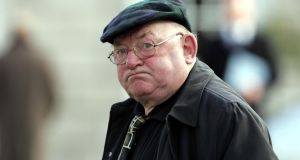 Expressions of sympathy on the late former TD Jackie Healy Rae will be heard in the Dáil on Wednesday, some 4½ years after his death. File photograph: Eric Luke/The Irish Times.

Expressions of sympathy for the late former TD Jackie Healy-Rae will be heard in the Dáil on Wednesday, some 4½ years after his death.

The independent deputy, who now has two sons representing Kerry in the House, Michael and Danny, died aged 83 in December 2014.

TDs are scheduled to offer their sympathies for 15 minutes on Wednesday when Leaders Questions concludes after midday.

Michael Healy-RaeTD, Jackie’s son, told the Irish Times that it was a request of the family to schedule the expressions of sympathy at this time. He said there were different reasons for the delay including the scheduling of elections and other events.

He said the timing of such an event is “up to the family themselves” and that there were “family reasons” for the delays such as the 2016 general election and this year’s local elections.

“It was always our intention to this. It is done at the family’s request. When the three Healy-Raes were elected to the council recent we said, ‘right, this is a good time to have it’.”

Three members of the Healy-Rae family - Jackie Jnr, Maura and Johnny - ran for election to Kerry County Council in May and comfortably secured seats.

A spokesman for the Oireachtas said that “expressions of sympathy usually take place following a request from a party/group/member via the Business Committee who then schedules them”.

Jackie Healy-Rae was a Fianna Fáil member of Kerry County Council for decades, but broke with the party in 1997 when he failed to get a nomination to contest the general election in the Kerry South constituency.

He won a seat as an Independent and held it until 2011, when he made way for his son, Michael, who was elected to replace him.

After his death, former taoiseach Bertie Ahern said Jackie Healy-Rae was always “very, very loyal” to the government he supported. He fought “tooth and nail” for the things that were important to him, Mr Ahern said.

Dick Spring, the former tánaiste and Labour TD who served at council and Dáil level with Jackie Healy Rae, said of him: “He was a stalwart for Kerry. He was a man who worked hard long and faithfully for the people of Kerry. He shall be missed.”