Dáil to debate plan to give walkers guaranteed access to land 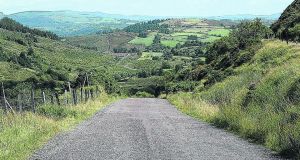 A new law designed to guarantee and provide better access to Ireland’s mountains, wilderness and countryside for walkers, cyclists and runners is being introduced in the Dáil today.

The Access to the Countryside Bill 2013 is being introduced by Dublin Mid West Deputy Robert Dowds of Labour and will be debated in the Dáil today, which is the monthly Friday sitting where backbench TDs get an opportunity to present their own private legislation. The Bills are selected by means of lottery.

The new legislation aims to increase the amount of privately-owned land that is accessible to the public.

In a briefing prepared in advance of the sitting, Mr Dowds pointed out that walking is by far the largest activity-based form of tourism in Ireland, attracting 743,000 overseas visitors each year.

“Scotland reformed its land access laws 10 years ago and has seen a significant increase in walking tourism, which now brings in £1.4 billion into the Scottish Economy and by 2015 will account for 22 per cent of total tourism revenue. There is huge potential for job creation in Ireland if we were to reform our land access laws,” added Mr Dowds.

There have been a number of disputes and clashes over access to the countryside and to Irish wilderness over the past two decades, with landowners and farmers denying access through farmland and to commonage. Part of the problem has related to a legal situation where landowners felt they would be made liable for any injuries occurred by people crossing their land, even trespassers. The law in that regard has been clarified somewhat in recent years.

Mr Dowds’ Bill will grant power to county councils to designate certain sections of uncultivated private land as accessible for responsible recreational use. This may include land in certain categories such as land above 200m in altitude, land along rivers or canals over 25 km in length, moors, heaths and downs, and land along coasts or disused railway lines.

“In designating land for recreational use, county councils must consider any potential inconvenience to the occupier of the land. All cultivated land, improved or semi-improved grassland and land surrounding a habitable dwelling is ineligible for designation as access land.

“If a landowner disagrees with a designation, he or she can appeal the decision to An Bord Pleanála. Landowners are completely indemnified from any potential litigation arising from the Occupiers Liability Act 1995,” he said.