The Dáil was suspended twice in the final hours before the summer recess as TDs argued furiously over speaking slots for Dáil debates. Video: Oireachtas TV 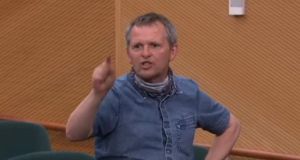 People Before Profit TD Richard Boyd Barrett was accused of ‘histrionics’ when he again refused to sit down. Image: Oireachtas TV

The final hours of the Dáil sitting before the summer recess ended in vitriolic exchanges with the House being suspended twice in a tumultuous row over speaking slots for Dáil debates.

Small political parties and Independent groups expressed fury at a deal they claimed would allow the Government to remove them from the early stages of debates and effectively “muzzle” them.

The Government sought the changes to give their backbench TDs better speaking slots.

In chaotic scenes, Government and Opposition TDs roared at each other across the Dáil auditorium in the Dublin Convention Centre.

Leas Cheann Comhairle Catherine Connolly struggled to maintain order and was forced to suspend proceedings for 10 minutes when TDs refused to take their seats.

And Tánaiste Leo Varadkar hit out at the “arrogance, nastiness and abusiveness of the smaller parties and far left parties” who tried to dominate the chamber.

In a major broadside he said he was “embarrassed to be a member of this chamber tonight frankly because of the behaviour of some of the parties”.

He said the new procedures would still give Opposition parties 74 per cent of the speaking time, “even though they’ve less than half the seats”.

Mr Varadkar claimed that any time a Government Minister or backbencher tries to make a point “you shout us down in the same way you bully people online”.

He said they repeatedly tried to “bully people in here because they are from a larger party”.

Mr Murphy claimed the Government was attempting to marginalise left-wing parties and groups.

Ceann Comhairle Sean Ó Fearghaíl later was forced to suspend the House a second time and accused Mr Boyd Barrett of “histrionics” when he again refused to sit down.

Earlier, Social Democrats TD Catherine Murphy said the Dáil would restart in September with “an outrageous proposal to change the rota of speakers in a way that had not been changed since the 1920s”.

Fine Gael TD Brendan Griffin told Opposition deputies they were a “national disgrace and we’re entitled to our speaking time and we won’t be denied our right to speak”.

People Before Profit TD Bríd Smith said it was like a “dictatorship” of Fianna Fáil and Fine Gael.

Sinn Féin TD Pádraig Mac Lochlainn said what had happened was deeply regrettable and his party had put forward a compromise proposal to strike a balance for all but the proposal was rejected.

When a vote was taken in the Dáil the Government proposal was accepted by 86 to 63 votes.

The uproar followed a row earlier in the day on the issue when it was first raised.

Under the new proposal, the Government parties, Sinn Féin and Labour will speak in the first slots.

Then Government and Sinn Féin will speak again followed by the next largest party (Social Democrats) and so on.

It means the Coalition and main Opposition parties will get to speak before each smaller party or grouping gets a chance to be heard.

While the amount of speaking time does not change, speakers from the smaller parties will not be heard until much later in the proceedings, when usually there is less interest in the debate.

Mr Varadkar said it “wasn’t fair” that in the previous Dáil “Independent TDs and people from micro parties got more speaking time than Government backbenchers”.

Social Democrats TD Jennifer Whitmore said “it beggars belief” that the Government and Sinn Féin have come together “to exclude voices of the Social Democrats, Solidarity-People Before Profit and Independent groupings from the speaking times”.

But Mr Varadkar insisted “we are going to re-establish democracy in this House” and the Opposition “can try to shout us down as much as they like”.

The row in the chamber on Thursday followed a stormy meeting on Wednesday of the Dáil Reform Committee where the Government parties and Sinn Féin agreed to change the current arrangement where a representative from each party and grouping gets to speak in rotation at the start of debates.

Ms Whitmore said “it is undemocratic and unfair. It is very disappointing that Sinn Féin has joined the Government on this front.”

Rise TD Paul Murphy claimed “the Government is trying to muzzle the Opposition” and it was not about the amount of speaking time.

But Mr Varadkar said every TD’s mandate “is equal” and “we had a situation in the previous Dáil where Government backbenchers could not get speaking time”.

He said “Independent deputies and people from micro parties got more speaking time than Government backbenchers did and that wasn’t fair.”

I’m bamboozled by the Covid rules. Can you simplify them for me?