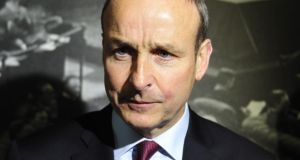 Fianna Fáil leader Micheál Martin: said the proposed period for the Dáil to rise is “too early and it is too long”. Photograph: Aidan Crawley

Fianna Fáil leader Micheál Martin has said he thinks a period of Dáil holidays proposed by Fine Gael is too long.

TDs are set to get about three months of holidays from the Dáil this summer because of renovations to Leinster House.

The Fine Gael parliamentary party was told last night the Dáil would rise on July 7th and return later than usual due to repair works being carried out on the building.

The Dáil usually returns in mid-September, so a later- than-usual return could ensure TDs are away from Leinster House for almost three months.

Government Chief Whip Regina Doherty said yesterday a final decision had not yet been made and said “any schedule will be based around works to be carried out”. She also said it would not affect the sittings of Oireachtas committees, which are expected to continue their business even as the renovations take place.

The renovations to Leinster House will focus on the old Georgian part of the building which houses the Seanad but not the Dáil chamber. However, it is understood that access to the chamber and the building will be curtailed during this period.

Too early and too long

Speaking at a Fianna Fáil event last night to celebrate the centenary of the Easter Rising and the 90th anniversary of the foundation of the party in 1926, Mr Martin said he felt the proposed period for the Dáil to rise is “too early and it is too long”.

“It is a surprise because that hasn’t been communicated to me, although I did speak with the Ceann Comhairle and the Clerk of the Dáil two weeks ago and they were indicating it would be the middle of July, around the 18th.

“The clerk did explain about the structural problems with Leinster House, the old part of Leinster House from his perspective, required urgent remedial works, in terms of securing it and so on.”

He said Fianna Fáil would be discussing the matter with other parties in the Dáil.

An invitation to tender for the renovations published this week said the “proposed works comprise full rewiring of historic Leinster House to current standards”. This will include the “carrying out of structural strengthening” to floors and other works.