Minute’s silence observed in memory of the 8,000 ‘slaughtered’ men and boys in that place 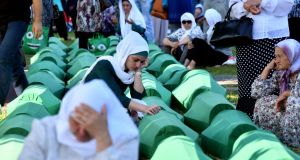 Bosnian Muslim women pray over the caskets of 71 victims of the 1995 Srebrenica massacre, at the memorial cemetery in Potocari, near the eastern Bosnian town of Srebrenica, on July 11th, 2017. File photograph: EPA

TDs stood in the Dáil for a minute’s silence to mark the 25th anniversary of the Srebrenica genocide, considered the worst atrocity in Europe since the second World War.

Sitting at the Convention Centre, Dublin, because of social distancing requirements the Dáil’s TDs paid tribute to the 8,000 men and boys killed in the massacre in 1995.

Asking TDs to “ pause to mark the 25th anniversary of the Srebrenica genocide”, he said “it is almost inconceivable that a short quarter of a century ago in Europe, approximately 8,000 men and boys were . . . slaughtered in cold blood for who they were and for the faith they wished to peacefully express”.

The war broke out in 1992 after the break-up of the former Yugoslavia and lasted three years. The massacre was perpetrated by the Bosnian Serb Army in July 1995 against Muslim Bosnians.

Mr Ó Fearghaíl commended the “ongoing voluntary work of the Bosnia-Herzegovina Association of Ireland in this regard. We are fortunate to have many Bosnians living here in Ireland . . . many of them personally touched . . . by the events of 1995. Therefore, it is important we stand for a minute’s silence to indicate that we remember them.”

‘Once you are not lily-white or freckled-skinned, you are labelled as non-Irish’