‘We have no idea, to put it bluntly, what if any money will be available to us in the event of a no-deal Brexit’ 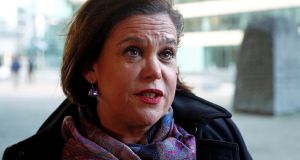 Sinn Féin leader Mary Lou McDonald: she said if the Government allowed the backstop to be renegotiated “this Government will not be forgiven”

Opposition TDs called on the Government to secure financial assistance from the EU to help businesses and farmers affected by Brexit even if there is a deal before March, during a debate on Brexit preparations on Thursday.

“On an EU support package that we may need following Brexit, it is my understanding that the Irish Government has not even asked the EU for support,” the Fianna Fáil Brexit spokeswoman Lisa Chambers said.

“We have no idea, to put it bluntly, what if any money will be available to us in the event of a no-deal Brexit,” she said.

“We will need financial support even in the event of a soft, orderly Brexit, and clearly if there is a crash-out no-deal Brexit we will need funds immediately for infrastructure and to assist Irish industry, particularly export businesses, our farmers and those in the agrifood sector.

“We cannot wait for a crash-out to happen before we seek help. We need to know what support package is in place now as a precautionary measure in case we need it.”

Her appeal was echoed by Sinn Féin and People Before Profit TDs. Richard Boyd Barrett said state aid rules should be waived by the EU, and “funds and money” should be made available.

Sinn Féin leader Mary Lou McDonald repeated her demand for a referendum on Irish unity if there was a no-deal Brexit. She also said that if the Government allowed the backstop to be renegotiated “this Government will not be forgiven”.

Ms McDonald’s predecessor Gerry Adams said: “There is a responsibility and a constitutional obligation to promote the goal of Irish unity, and to work to achieve it through democratic dialogue and negotiation.”

Tánaiste Simon Coveney defended the Government’s preparations for Brexit. He said he spoke to the EU’s chief negotiator Michel Barnier “more or less every day”.

The Minister of State for European Affairs Helen McEntee praised Ireland’s EU partners. “EU solidarity has been absolute from our fellow member states, for which we thank them.

“Many of my colleagues have come from across Europe to visit Ireland and the Border region to gain a better understanding of the issues we face on this island. We have had their full and unwavering support every step of the way.”

Earlier, Mr Coveney confirmed that Irish motorists crossing into the North and Britain would have to have a “green card” to prove they were insured if there was a no-deal Brexit.

He reiterated his view that the prospect of no deal was still unlikely. However,he acknowledged that the card “will be available” to drivers, after the Motor Insurers Bureau of Ireland said such authorisation would be needed in the event of no deal being reached.

The Tánaiste was responding to Fianna Fáil deputy leader Dara Calleary, who asked Mr Coveney to confirm if there was a “legislative basis” for the cards because no specific proposals were outlined in the contingency plans.

“What are the plans to deal with practical issues such as insurance for communities who live on the Border or who have to travel regularly into the UK?”

Mr Coveney said if there was no deal the UK would be outside the EU directive.

“Just to give some guidance here, we’re all working to ensure it will not happen and in my view it won’t happen, but should there be a hard Brexit the UK including Northern Ireland will no longer be part of the motor insurance directive, which is an EU directive.

“This will mean a green card will be required to demonstrate to the authorities in Northern Ireland and the rest of the UK if you’re driving there that valid motor insurance is in place for those vehicles.

“So if they carry the green card, which will be available to them, they will be covered in that regard.”