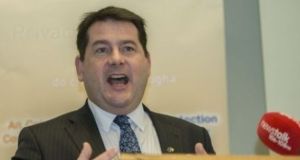 The Dáil’s internal ethics committee has said it does not have the power to investigate complaints about the former Fine Gael TD Dara Murphy.

The members’ interests committee met on Thursday morning to consider a request from Fianna Fáil whip Michael Moynihan that it inquire into Mr Murphy’s attendance record.

The former Cork North-Central TD has been in Leinster House on 24 sitting days out of 70 in the first nine months of 2019 and 42 of the 104 during the whole of 2018. It is the lowest attendance record of all TDs by a considerable margin.

Two sources on the committee said it would now write to Mr Moynihan and tell him that they could not investigate the issue and they could not direct the Standards in Public Office Commission to do so either.

This is because Mr Murphy is no longer a TD.

The committee has also deferred a decision on whether to censure two Fianna Fáil TDs, Niall Collins and Timmy Dooley, over the voting controversy until the new year.

It follows a meeting on Thursday morning where members examined whether four party TDs were in breach of ethics legislation following a complaint from Fine Gael TD Noel Rock.

What happened with the FF TDs?

The controversy first emerged when Mr Collins voted six times for his colleague Mr Dooley while he was absent from the chamber during the weekly bloc voting session last month.

It then emerged that the party’s Brexit spokeswoman, Lisa Chambers, mistakenly sat in her colleague and party deputy leader Dara Calleary’s seat for one vote before moving to her own seat for the same vote.

It is understood Ms Chambers will be issued with a warning. A report with a recommendation on the warning is likely to go to the Dáil next week.

Mr Rock had filed a complaint to the head of the Members’ Interests Committee Hildegarde Naughten in relation to the three TDs as well as public expenditure spokesman Barry Cowen. It is understood the complaint about Mr Cowen will be dismissed.

When asked whether there had been any further progress on a potential examination of the complaints raised about Mr Murphy, a commission spokesman said while they could not comment on individual matters, those relating to a member of Dáil Éireann who is not an officer holder could be referred to the ethics committee. That committee decided on Thursday that it did not have the power to investigate complaints.

Sources have suggested that the clerk of the Dáil may then investigate any complaints.

Despite this, a spokeswoman for the Oireachtas said “the Clerk of the Dáil has no jurisdiction in this matter”.

‘Forgotten’ Longford: Only county without a TD hoping for change 01:30
Mental Health Commission has ‘serious concerns’ over delays in opening service 01:20
Fine Gael to stress economic warnings as campaign enters crucial week 01:00
Seamus Mallon remembered: A man with ‘sharpest political antennae’ 01:00
‘It’s something you don’t want to hear. You always think it happens in other places’ 01:00
SUBSCRIBER ONLY