Dáil could have extra sittings due to pressure for speaking time 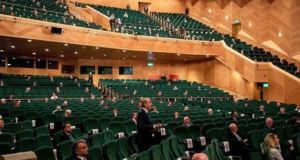 The Dáil may have extra sittings this year due to pressure for speaking time, the Ceann Comhairle has said.

In a recent interview, Seán Ó Fearghaíl said: “We may have to look at Monday or Friday sittings at least on occasions” because of the “constant pressure for more and more business to be done” and the late-night sittings during the year.

Mr Ó Fearghaíl also said the Houses of the Oireachtas spent €11 million less than budgeted for in 2020 despite regular sessions in the Convention Centre that cost approximately €27,000 for each sitting day.

He said the 2020 budget was €154 million but the spend will be €11 million less, even allowing for the spending on the centre. “The lion’s share” of the cost of using the centre – 68 per cent plus – is for broadcasting.

“We can’t come down here and operate behind closed doors,” Mr Ó Fearghaíl said, adding there is no prospect for the foreseeable future of the House returning exclusively to Leinster House.

He also revealed some 75 per cent of the 430 employees of the Oireachtas have been working from home during the Covid-19 pandemic, “yet it’s been possible to keep the whole operation running, and running smoothly”.

The Ceann Comhairle also spoke about a challenging year for the Dáil after a general election that saw a turnover of one-third of the 160 TDs, the longest interregnum between governments in the State’s history, a seismic political shift post-election, Brexit, and all filtered through the lens of the coronavirus pandemic.

After Brexit, “the relationship between Britain and Ireland will need to be nurtured and developed even more I think, in the period ahead,” Mr Ó Fearghaíl said.

Asked if it was the change in Government or Covid that has led to TDs becoming apparently more argumentative, he said: “every Dáil has its own dynamic as does every government and every Opposition”.

“The interregnum and Covid has meant that it is taking longer for the 33rd Dáil to settle down and to demonstrate precisely what type of Dáil it’s going to be.”

Mr Ó Fearghaíl said the election “threw up a radical change in political alliances and that that went through without a murmur effectively”.

“ And people have almost forgotten that that pretty seismic shift has happened, and we’ve moved on from it. And the world hasn’t ended and the business of Government is being done.”

A return to majority Government after the last minority government might have led to a “certain degree of triumphalism” by a small number of TDs and some in the public and civil service, he said but added: “I think the vast majority of common sense members see that we work best when we work together and because of that we’re seeing a growing sense of collegiality.”

That is increasingly reflected in the Dáil business committee, an “essential reform” introduced in 2016 to facilitate the ordering of business for the minority government.

There have been “fairly robust meetings” of the committee reflected later in major rows in the Dáil, Mr Ó Fearghaíl said but “we’ve got to a point where the meetings are steady, business like and there’s even a degree of camaraderie beginning to emerge”.

Mr Ó Fearghaíl said when he was a Fianna Fáil party whip in 2011-2016 the government would “occasionally throw you a bone but basically the agenda was always the government’s agenda”.

But, he said, “it has changed completely from that and I never see us going back. At least I think it would be a dreadfully retrograde step to go back to that.”

The issue of maternity has come centre stage after Minister for Justice Helen McEntee announced she is expecting her first child, becoming the first Cabinet Minister to be pregnant in office. TDs and Senators are not entitled to maternity leave as under the Constitution a member must be present and voting.

Breastfeeding facilities are available in Leinster House, and additional staff are provided to support a TD on maternity leave.

Fine Gael TD Jennifer Carroll MacNeill has introduced a Bill to provide for a referendum on the issue. “But without that referendum we don’t know how much further we can go,” Mr Ó Fearghaíl said.

The number of late-night sittings in the last Dáil was reduced, but Covid-19 had changed that, and there had been a number of “very late night sittings that personally I am very opposed to”.

There were two conflicting demands – to create a family friendly working environment “and then there is the demand from TDs to have more time to spend in their constituencies”.

So they would have to look at occasional Monday and Friday sittings. “If we’re ever going to get to 50:50 (between male and female TDs) we have to make the changes now.”

When the so-called “Golfgate” controversy erupted over the failure by some politicians to observe public health guidance the Ceann Comhairle raised some eyebrows when he spoke out about the issue in a strong statement referring to “arrogant delusion”.

He said he has a responsibility to protect the interests of members. “I felt it was incumbent on me to, number one, make clear to the public that the Oireachtas was not organising this. Not one cent of Oireachtas money was invested in this. It was a mistake and I wanted to set the record straight and I think I did.”

He also raised some eyebrows in his response to the North’s First Minister, Arlene Foster, when she wrote to him seeking action over a controversial tweet by Brian Stanley about the Kilmichael ambush in 1920 and the Narrow Water massacre in Warrenpoint, Co Down, in 1979.

Mr Ó Fearghaíl said he had a responsibility to uphold the standing of the Oireachtas and the good name of Oireachtas members “and it was in that context that I replied”.

There was controversy too when in September Minister for Health Stephen Donnelly was tested for Covid-19 and the entire Cabinet that had met beforehand was expected to have to self-isolate and the Ceann Comhairle was advised to suspend the Dáil. The House did resume later with Ministers of State taking business and Mr Donnelly’s test proved negative.

Mr Ó Fearghaíl describes the event as “embarrassing” and said the lesson he learned is that “in future all communications of that nature should be in writing so that we don’t have difficulties”.