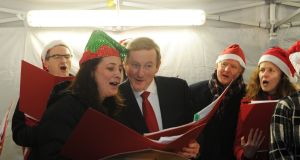 Taoiseach Enda Kenny singing with Catherine Martin of the Green Party at the switching on of Christmas tree lights in Leinster House. Photograph: Aidan Crawley

“They’re getting great mileage out of those balls,” remarked a Leinster House staffer as the main players gathered for their big moment.

Seven men in all.

A minor commotion blew up behind the optimistic crowd-control rope.

And there was Senator Marie Louise O’Donnell doing a reverse limbo and flinging a leg over the flimsy barrier.

“We need gender balance,” she boomed, planting her trailing foot on the forbidden grass, while dragging fellow Independent Senator Grace O’Sullivan in her wake.

Negotiating ropes is not an obstacle to Grace, a former Greenpeace activist who earned her stripes on the Rainbow Warrior.

After another blood-curling roar – “gender balance!” – Marie Louise made straight for the Oireachtas Christmas tree.

“Ah, there she is,” said Enda weakly, as the Senators rightly steamed in to even up the score a little.

With the two women gamely leaning into the picture frame from the margins, the ceremony began.

The annual switching-on of the Oireachtas Christmas tree lights is always an enjoyable affair, usually for the worst of reasons. That’s not to take anything away from the performance of the choirs who sing festive carols on the occasion. Last night’s renditions from the Oireachtas Choir and the Cruinniu Choir from Wicklow were magnificent.

There are times when leaders are in deep trouble, or when their parties are rowing and everyone in the poisonous air around the tree has to pretend all is well.

This time the absence of the Fianna Fáil leader played havoc with the Christmas cringe potential. Micheál Martin had to go to RTÉ for an appearance on the Six One news. There he would repeat what he said earlier in the Dáil about Sinn Féin leader Gerry Adams and what he knows about the IRA murder of a prison officer in 1983; why it took him over two years to inform the Garda about information he received on it; and what he means when he says the murderer was “disciplined” by the Provos.

It’s a disturbing story, and one which will continue on Wednesday in the Dáil when Adams is expected to make a statement on the matter.

But without Micheál, whose questions clearly annoyed the Sinn Féin leader and his TDs yesterday, the tree ceremony was less fraught than it might have been.

The Ceann Comhairle was delighted to be officiating. On his own behalf and on behalf of the party leaders, Ó Fearghail wished everyone who works in the Oireachtas a very happy Christmas and thanked them for all their help during the year.

None of them – apart from Adams, who can chose the time of his parting – can be sure they’ll be back on Leinster Lawn for a reprise in 2017.

The same Adams stuck very close to Kenny during the formalities. At one stage it appeared as if the Sinn Féin leader was trying to have a discrete word with him, but Kenny nimbly moved away.

The Taoiseach had not offered him any comfort earlier in the House on the disturbing questions Martin raised about Adam’s involvement to the sequel, decades later, to those murderous events in Portlaoise.

When the leaders moved to stand next to the tree, Enda nearly garrotted himself on a guy rope as he walked briskly ahead of Gerry.

The Ceann Comhairle pressed the big red button, and the lights went on first time, illuminating the very large balls for another year.

Afterwards Kenny and Adams spoke to the singers from Cruinniu, who were doing an excellent acapella version of Wham’s Last Christmas, clicking their fingers in accompaniment. Enda must have thought Micheál had arrived after all.

He quickly peeled away to find a baby to hold up for the cameras.

Then, in accordance with tradition, the Taoiseach elbowed his way into the Oireachtas choir and briefly joined in the singing. He appeared to be serenading one particular man. Afterwards we found out that civil servant Fionn is the pensions expert in Leinster House.

Adams didn’t stay long. But he stayed long enough to video the Wicklow choir with his phone.

He quickly tweeted it with this message: “Last Christmas I gave U my heart. This Christmas can I have it back again.”